When Where How Pakistan WhenWhereHow.PK | Technology And Business News from Pakistan
Home How to Pakistan to host Istanbul Process meeting on countering religious intolerance next year 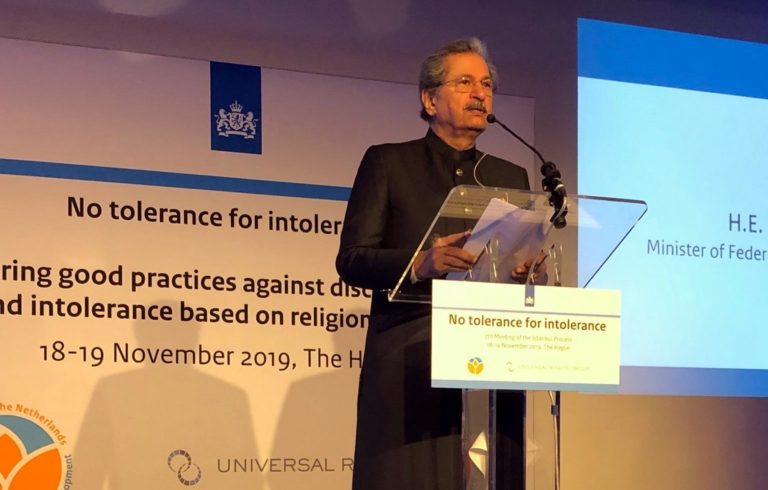 Pakistan will host the 8th meeting of the Istanbul Process next year with a focus to evolve responses to growing religious intolerance and discrimination based on religion or belief, the Foreign Office (FO).

The announcement in this regard was made by Federal Minister for Education Shafqat Mahmood at The Hague, Netherlands during his keynote address at the 7th Istanbul Process meeting.

Mahmood underlined the need for upholding the right to self-determination of people under foreign occupation. He called upon the flag-bearers of human rights to “eschew ambivalence and double standards” in the face of grave human rights violations including in Indian-occupied Jammu and Kashmir.

He also expressed deep concerns over the growing incidents of “systematic discrimination and state-sanctioned violence against Muslims” in India, the FO statement said.

Talking about the importance of upholding fundamental freedoms, the minister stressed that freedom of expression must be exercised with responsibility and the international community should “begin to consider reasonable restrictions in this regard”, both online and offline.

Mahmood also shared the range of steps taken by Pakistan in the field of education and for the promotion of inter-faith harmony and freedom of religion or belief. In this context, he highlighted the recent initiative taken by the government to open the Kartarpur Corridor for Sikh pilgrims.

According to the FO, the Istanbul Process represents an operational mechanism of a consensus-based resolution at the Human Rights Council that seeks to promote the implementation of an 8-point action plan to combat religious intolerance and other related issues.

He cautioned politicians against using “incendiary and populist rhetoric” for electoral gains, saying it can serve as a catalyst for hate speech leading to acts of violence, systematic discrimination and in some cases acts of terrorism.

The Minister drew attention to the alarming levels of Islamophobia in many parts of the world due to growing incidents of hate crimes, negative profiling, assaults on hijab wearing Muslim women, denigration of venerated Muslim personalities and symbols.

He also expressed deep concerns over the growing incidents of systematic discrimination and state violence against Muslims in India.