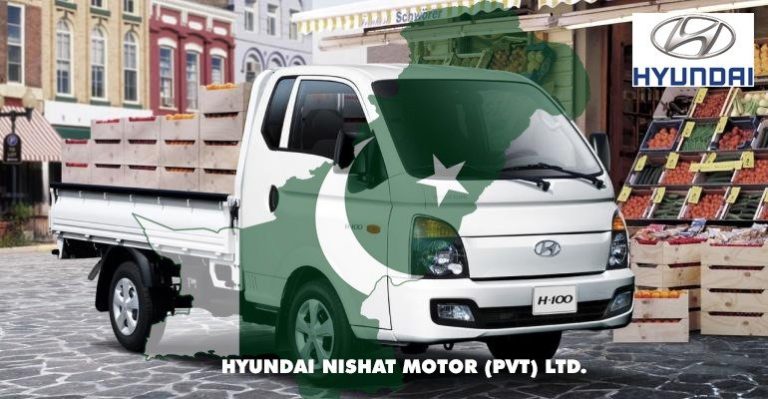 Hyundai Nishat Motors Private limited (HNMPL) has not yet announced the prices of their ‘Hyundai H-100 Porter’, however, as per Automark sources the launching ceremony, booking opening and the price announcement is expected to be on 2nd of December 2019 in Lahore. The ceremony invites have been sent to large number of dealers, various bankers, vendors and valued customers.

Pakistan’s famous light commercial truck/pickup ‘Shehzore’, has the same engine as that of Hyundai H-100 previously which has now been discontinued and people are waiting for this pickup since a long time. The pickup has 1.0 ton towing weight capacity, 2.6L Euro II diesel engines with 5-speed manual transmission power. The Porter H-100 has various applications; it can be used as a flat deck van, an ambulance, a security van, a refrigerator van, and a delivery van.  Also, Hyundai H-100 Porter will be the first locally assembled pickup that offers a four- year or 100,000 km warranty.  This news is a relief for the rapidly, falling automotive industry of Pakistan.

The offer has never been given by any other local assembler in Pakistan because of which the consumers have been anticipating the pickup to be launched for a long time. These offers make the Hyundai H-100 Porter a tough competition to tackle.

Hyundai Nishat Motors Private limited (HNMPL) announced a local assembling vehicle plant in October 2019 during its launch program. According to the announcement, the plant was to be operational by January 2020. The launch ceremony was done for their digital showroom and Hyundai Ioniq Hybrid car in Karachi on last month. The inaugurated facility included the company’s trademark 3S dealership, along with a digital showroom.

Locally assemble Huyndai Porter H-100 in its manufacturing facility in Faisalabad which would give the Hyundai H-100 Porter a 20% indigenization. Talking with media at the occasion of Inauguration ceremony of showroom in Karachi, Tatsuya Sato of HNMPL says that a total investment of $150 million has been made in the Faisalabad facility which will have an annual production capacity of 15,000 units. It is a CKD operation in which the parts would be imported and locally assembled in the production plant. Also, the facility will open up 250 employment opportunities for the locals. Lastly, he added that the company aims to increase localization by 45% over the next 5 years.

As per Automark sources, the HNMPL is also eyeing the Prime Minister ‘Kamyab Jawan Kamyaab Pakistan’ campaign by the National Youth Development program. The program offers 6 schemes through which the youth can get more opportunities to excel in their desired programs.

HNMPL is a joint venture between Nishat Group (Pakistan), Sojitz Corporation (Japan), and Millat Tractors Limited (Pakistan), and is partnering with Hyundai Motors (Korea) to become a leader in the automobile market in Pakistan.

The ground breaking ceremony of the Hyundai-Nishat vehicle assembly plant at Faisalabad’s M-3 Industrial City took place in last December 2017. The local production of vehicles is expected to begin within two years. Hyundai-Nishat Motors signed an investment agreement with the Ministry of Industries and Production under the Automotive Development Policy 2016 – 21 in early December 2017 to set up a Green Field project to undertake assembly and sale of passenger cars and one-ton commercial vehicles.

The groundbreaking was performed by the Prime Minister of Pakistan Mr. Shahid Khaqan Abbasi. The venture sees an investment of US $230 Million as the plant will initially produce 7,000 vehicles by 2020 and will enhance its production to 30,000 units by year 2023. Hyundai-Nishat intends to launch a range of vehicles from hatchbacks, sedans & SUVs to commercial vehicles. Three vehicles were displayed during the event, namely Hyundai Tucson, Hyundai H-1 van and Hyundai H-100 pickup (The latest version of Hyundai Commercial Pickup known as Shehzore in Pakistan).