When Where How Pakistan WhenWhereHow.PK | Technology And Business News from Pakistan
Home Life K-P Launches an App to Trace Missing Children 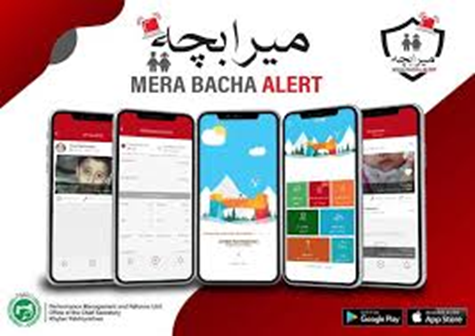 To support the recovery of missing children, the provincial government on Thursday launched a mobile application. This application will also be linked to the citizen’s portal.

“It is the priority of this government to ensure the protection of children. The Mera Bacha Alert application is a golden step in this regard,” stated Mahmood, adding that the application will not only help recover missing children but will also help discourage unpleasant incidents involving innocent children in the province.

He hoped that the application will help address the issues of child abuse. He also assured that his government will provide all necessary support to manage all the tasks and functions of this application.

The application, which has been developed by the K-P Performance Management and Reforms Unit (K-P PMRU), will add to the K-P Citizen Portal and the Pakistan Citizen Portal.

Before inaugurating it, the chief minister was briefed about the premise for developing the application, the work that has gone into it, how it will work and the features it has.

He was told that the idea of developing the application came in reaction to various cases of child abuse which have been reported in the province and that one of the common themes in most of the cases was that the children went missing for a period.

The application, PMRU officials said, provide parents with the ability to file a missing person report with the police instantly if their child has gone missing. They will be able to add a picture of the missing child using the application along with their identifying attributes.

The application will generate an alert and a short text message (SMS) which will be sent to the district police officer (DPO), the regional police officer (RPO), the inspector general of K-P Police (IGP) and the Chief Secretary.

Parents will be informed if the investigation has been completed. The chief minister and the chief secretary can also monitor the status of cases and see performance of police investigators in near real-time.

The application will also help develop a directory of all cases of missing children at the provincial level.

Moreover, the public web portal will also list a directory of all children who are either currently still missing and those who have been found. It will be accompanied by a directory of the relevant police station and Child Protection Centers.

Furthermore, the system will also be integrated with the police call centers and Safe City systems, with dedicated access to Edhi and another child protection centers.

Advisor to CM on Merged Districts and spokesperson for the provincial government Ajmal Wazir, IGP Naeem Khan, PMRU Director Muhammad Fawad and others attended the ceremony.