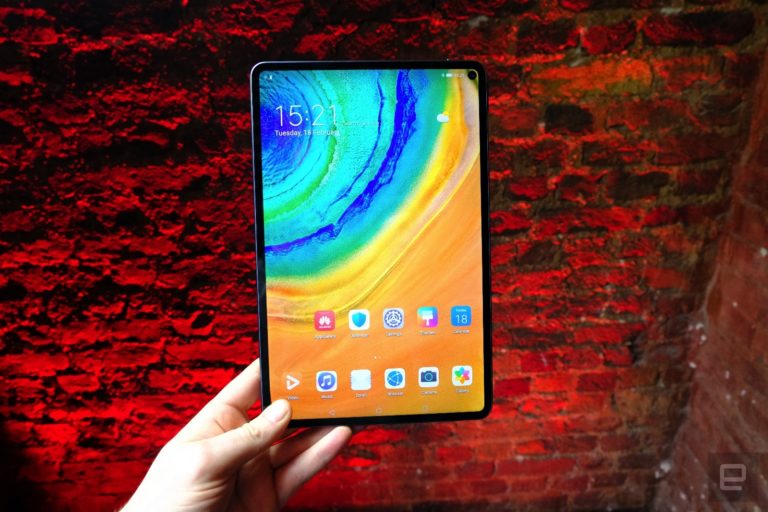 The MatePad Pro is a 10.8-inch tablet that, weighs 460 grams, like the similarly sized iPad Pro. It’s got a gorgeous magnesium alloy frame with curved corners. There will be dark “forest green” and “afterglow orange” options, too, both with vegan leather back panels.

The MatePad Pro’s cellular and WiFi antennae are molded directly to the tablet frame, meaning no visible antenna lines. There’s also an 8-megapixel hole-punch camera on the front (for conference calls), which mirrors, location-wise, the rear-facing 13-megapixel camera. Hole-punch cameras are unusual for tablets, but has helped Huawei hone down those bezels.

With a 90 percent screen-to-body ratio, the MatePad Pro has a very thin bezel around the screen apparently 4.9mm. That’s far smaller than the iPad Pro’s border, which measures more than 8 mm.

The screen itself is vivid and bright (up to 540 nits), with a 2,560 x 1,600 resolution — high enough to split up tasks and apps on screen without making things tiny or blurry.

There’s a 7,250mAh battery inside the tablet, but the most interesting spec here is the size and kinds of charging the MatePad Pro can handle. Fast-charging this time around can take in up to 40W, while Huawei has really amped up wireless charging, up to 27W if you have the appropriate wireless charger.

The tablet itself is a wireless charger, too, able to reverse-charge compatible phones at 7.5W, The flat 10.8-inch slate makes for a far more viable charging surface than a phone of similar size — it’s a smarter place to include the feature. You might actually use it more often than you do on your Samsung or Huawei phone.

The M-Pencil is more interesting. The peripheral is definitely the arch-nemesis of the Apple Pencil, but has a cute hexagonal design, like a Staedler pencil. It magnetically attaches to the MatePad Pro and wirelessly charges itself, too. Half a minute of charge equates to 10 minutes of use, and you can expect 10 hours of scribbling on a full charge.

When it comes to the software, a new ‘app multiplier’ feature is the stand-out idea, allowing you to run two versions of several core apps, including the web browser, in a landscape arrangement.

Like Huawei’s updated foldable, the MatePad Pro packs the company’s own Kirin 990 processor, which includes the modem needed for a 5G connection. It means there’s plenty of processing power, even if, in these days of no Google Play, there really isn’t much of note to push Huawei mobile devices to their limits.