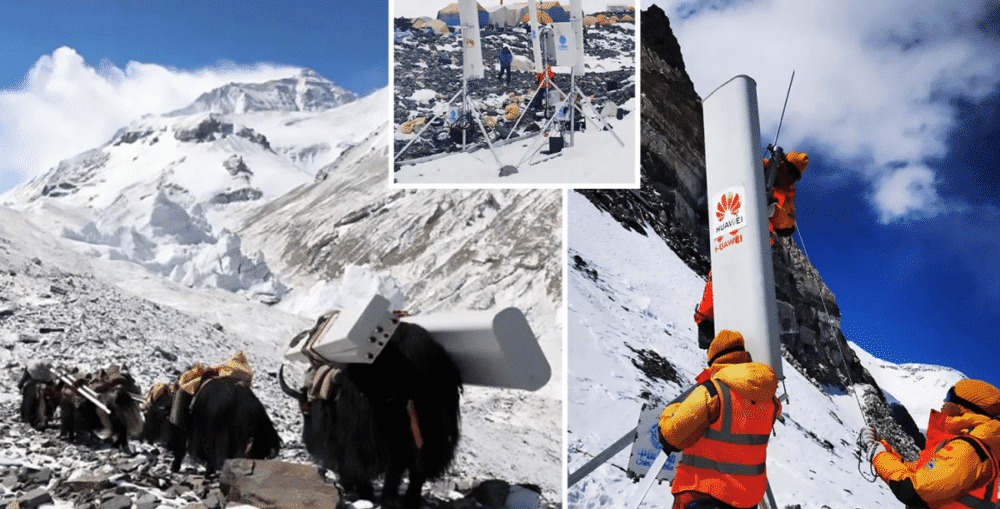 At a height of 6,500 metres, it’s the highest 5G antenna installation in the world, say organisers China Mobile Hong Kong and Huawei.

China Mobile Hong Kong (CMHK) announced completion of the joint installation on Facebook, saying that it had “successfully built more 5G base stations, including 6,500 meters above sea level on the highest peak, Mount Everest”.

The firm said that it would help improve communication for “mountaineering friends” for whom it was no longer “a dream to reach 8K live broadcasts with relatives and friends on 5G network”.

Huawei said the extremely compact technology it has developed for 5G made it particularly suitable for deployment in the extreme environment found on Mount Everest, where it could be carried on the backs of the yaks.

Yaks provided transport as they are already widely used in the Himalayas due to their thick fur and layers of fat, as well as large lungs and heart to tackle the high elevation.

Both companies have a network of engineers on site to maintain and continue to optimise the new technology.

They also plan to use the network in order to properly measure the true height of Mount Everest, currently officially listed as 8,848 metres (29,029 ft).

Three 5G base stations have been built at Everest Base Camp at an altitude of 5,300 meters, and a transition camp at 5,800 meters.

A further two stations have now been installed at the 6,500-meter-high elevation camp, so the signal will be able to cover the summit of Mount Everest.

About 25 kms of fibre optic cables were laid as part of the project.

More than 150 employees took part in the construction and maintenance of the equipment, including the upgrade of the 177 km transmission trunk line and route along Everest, Unwire added.

The firms said the technology was invented in the region to help provide 5G high-definition video of the magnificent mountain vistas available in the area.

It would also be a useful tool for mountaineers, scientists and other specialists working in the area.

CMHK said the network speed of 5G was “more than ten times that of 4G.