When Where How Pakistan WhenWhereHow.PK | Technology And Business News from Pakistan
Home New Alert Honor X10 Design, Colours Gets Revealed Ahead of Launch 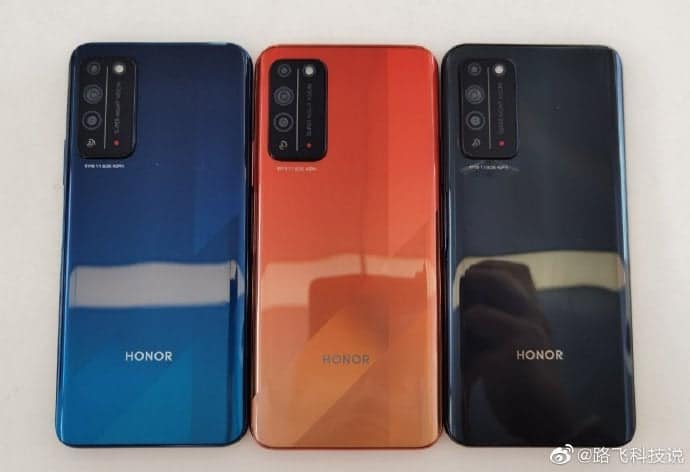 Honor X10 is due for launch on May 20th in China. However, the device, mostly its specifications, have been leaked extensively in the past. Now, a Weibo user has shown the live images of the smartphone, as mentioned by Playfuldroid. Yesterday, its pop-up camera structure got leaked on the Chinese social media.

Looking at the images, the back of the Honor X10 is showcased and the device is sporting three colour variants namely Orange, Black and Blue. Additionally, the back camera arrangement is also visible with a triple camera setup.

The Honor X10 has a triple-camera setup and AI logo is visible along with the ‘Super Night Vision’ branding inside the rectangular housing. A circular flashlight occupies a place beside the cameras. Apart from this, there’s a mention of ‘RYYB 1:1.8/26 ASPH’ describing the camera lens.

This iterates the presence of an aspherical lens (Ultra vision camera) that is a term used by Leica to brand their multi-element wide-angle or fast normal lenses to reduce aberrations. The device has already been leaked before housing a 40MP  Sony IMX 600Y sensor. The other two are 8MP ultra-wide and a 2MP macro lens.

Other specifications include a 6.63-inch FHD+ IPS LCD display with 60Hz refresh rate. However, a Pro variant will tag along with the X10 that will have a 90Hz refresh rate and improved cameras with an 8MP super zoom periscope lens instead of the macro lens found on X10.

Both the handsets will be powered by Kirin 820 5G SoC, and come with a 4200mAh battery. The X10 has 22.5W fast charging support while the X10 Pro will have both 22.5W and upto 20W support for wireless charging. With just four days left for launch, there is not much left to know about the device except for the pricing.