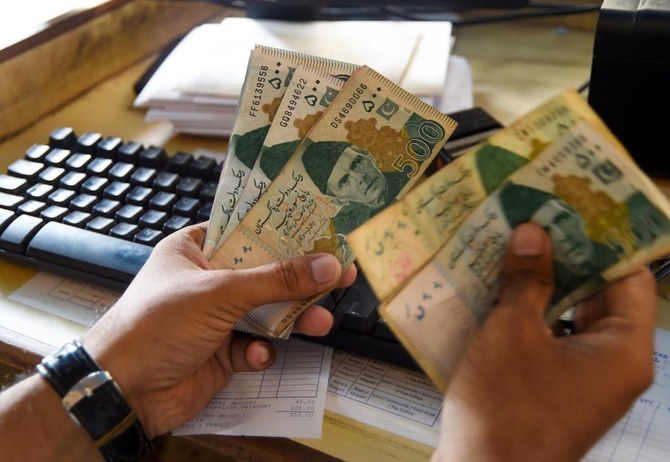 Government employees in Pakistan will see an increase in their salaries in the upcoming fiscal budget, chairman of the national standing committee on finance, revenue and economic affairs, Faiz Ullah Kamoka, told Arab News on Sunday.
On Saturday, local media reported government employees would see an increase in salaries of up to 20 percent in the new fiscal budget expected in the second week of June. Kamoka did not confirm the increment amount.

“Definitely the salaries of government employees will be increased in the upcoming budget,” Kamoka said. “Government’s focus is on the stabilization of the economy in COVID-19 crisis. Our priority is to keep jobs intact, meet defense requirements and stabilize exports,” he said.
A similar demand has also been forwarded by the country’s defense ministry which is seeking up to a 20 percent increase in the salaries of armed forces personnel, according to a Ministry of Defense memorandum dated May 8.

Following lockdowns related to the COVID-19 pandemic, Pakistan has been on a steady economic downturn, and announced last week that the highly awaited budget for the next fiscal year would hold no new taxes.

Meanwhile, the International Monetary Fund (IMF) has projected Pakistan’s economic growth will be negative 1.5 percent in the current fiscal year, and at 2 percent for the next fiscal year, 2020-21.

Pakistan is this year expected to achieve roughly Rs3.8 trillion in revenue collection against a revised tax collection target of Rs 5.238 trillion. The country’s fiscal deficit is expected to surge to 9 percent against a targeted 7 percent. Under these circumstances, with the budget looming closer, experts and economists have pointed toward the difficulty of implementing any drastic salary increments.

“The biggest challenge is from where to meet expenses like a raise in salaries. At this point in time, the government needs to reduce non-development expenditure and give tax relief to businesses to survive and revive,” Dr. Ikram ul Haq, a Lahore-based economist, told Arab News.
“Revenue generation is possible with lowering of taxes, especially sales tax. The present rate of 17 percent is on paper. The effective rate is not more than 8 percent,” he said.

“Federal Board of Revenue’s (FBR) own efforts yielded only Rs84 billion and from arrears, Rs18.6 billion. It confirms a negligible share [of tax collection] on the part of FBR,” he said, and added: “In these circumstances, a rise in salaries and pension is not the right step.”

However, Dr. Khaqan Najeeb, who has served as adviser to the Ministry of Finance, said expenditures could be curtailed to make room for the expected salary increment.

“Savings are possible in interest payments, operating expenses cutting untargeted subsidies and moving away from state funded pensions,” Dr. Najeeb told Arab News.
“An increase in salary of people drawing up to Rs 50,000 may be necessary along with those putting their lives at stake in hospitals,” he said and emphasized that multi-rounds of monies for the vulnerable and businesses were needed alongside new growth support programs to avoid a recession.