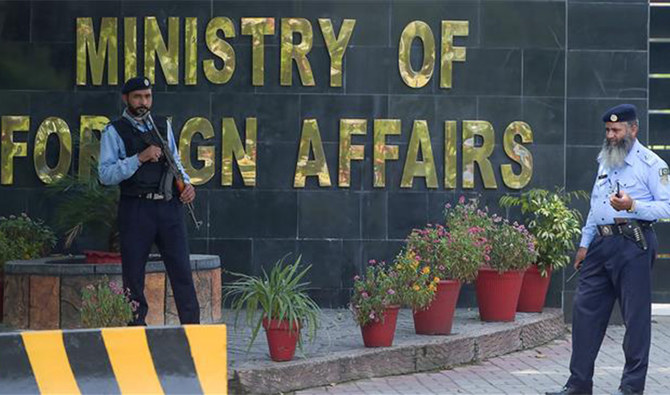 Pakistan said on Monday it is working on reciprocatory measures a day after India expelled two diplomats on “espionage” charges, with the two on their way to Islamabad from New Delhi this morning.

“Both our officials are on the way to Pakistan, as they are coming by road from New Delhi, so they will reach Wagah border by evening. Reciprocity in such acts is a normal procedure, and it is in the process,” Khawaja Maaz, spokesperson of Pakistan’s High Commission to India, told Arab News on the phone from New Delhi.

It follows a statement by India’s Foreign Ministry on Sunday which said that the officials had been apprehended and asked to leave the country within 24 hours for “indulging in activities incompatible with their status as members of a diplomatic mission.”

Pakistan slammed New Delhi’s statement and said that the charges were “false and unsubstantiated.”

“Pakistan has always followed the diplomatic norms and conventions that govern diplomatic relations between any two countries. We are a law-abiding country. We will take whatever step required to reciprocate and ensure the safety of our officers and diplomates in India,” Aisha Farooqui, Pakistan’s Foreign Office spokeswoman, told Arab News.

She added that the atmosphere of bilateral relations with India was already taut and that “this step of expelling Pakistani diplomats on false allegations will add to it.”

“There are a series of actions India has taken unilaterally like sending spy drones, maligning Pakistan on fake accusations and harassing high commission officials,” she said, adding that the latest move was “unacceptable.”

“Now they (India) went to a new low by detaining officials of our high commission, torturing them and pressurizing them to own up to false allegations. It is completely unacceptable,” Farooqui said.

Detailing the procedural steps that would follow, she said that India’s action was in clear violation of the Vienna Convention on diplomatic relations and norms.

“In this regard, the Indian Charge d’Affaires was summoned to the Foreign Office last night for a strong demarche, conveying Pakistan’s condemnation of the Indian decision to declare two officials of the High Commission for Pakistan in New Delhi persona non grata and rejection of all baseless Indian allegations against the High Commission officials,” Farooqui said.

The countries have fought two wars over the region and their forces regularly trade fire across the de facto border between the two countries, which is the 740-km long Line of Control.