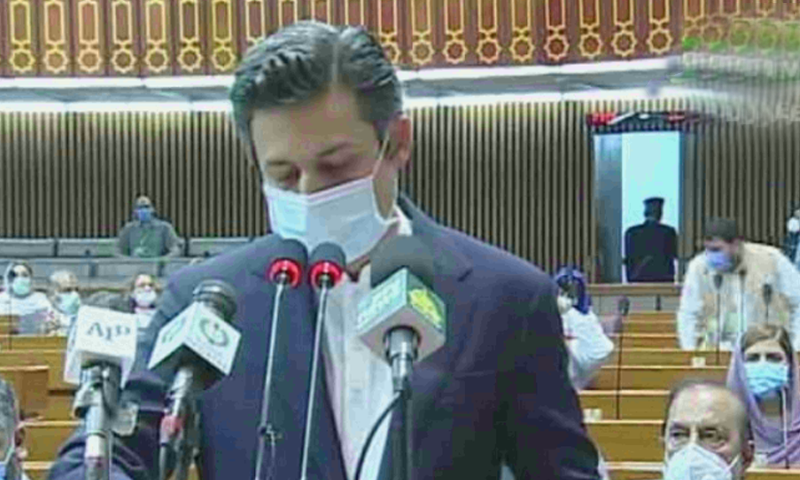 Amid a protest staged by the Opposition lawmakers who later walked out of the House, the federal government on Friday presented the budget for the year 2020-21 with no increase in salaries and pensions despite the rising inflation and reduced purchasing power, as the privatisation was also promised in the budget speech in the National Assembly.

With the government estimating Rs7,136 billion expenditure and total revenues of Rs6,573, an amount of Rs650 billion has been reserved for Public Sector Development Programme (PDSP), Rs1,290 billion for defence and Rs2,496 billion for interest payments in a budget in which no new tax has been imposed.

The target for non-tax revenue has been set at Rs1,108 billion while the FBR is expected to generate Rs4,963 billion. The government also eyes Rs100 billion from privatisation proceeds, as the fiscal deficit is estimated to be Rs3,195 billion.

In his budget speech, Federal Minister for Industries and Production Hammad Azhar again accused the PML-N government of keeping the rupee artificially and causing losses to state-run enterprises. “Our aim is to restore economy,” he added while promising social justice.

Hammad also claimed improvement in current account deficit as an achievement but added that national debt had doubled in five years, as the Opposition members – holding placards – chanted slogans against the “selected government”, its economic policies and the issues like sugar scam and petroleum shortage.

The government would bring economic reforms, improve growth rate and eradicate corruption, he told the House and said the capital gain tax would be reduced by 50 percent.

But the most alarming feature is the fact that the government, despite the tall claims made before and after 2018 elections, has forecasted negative growth for manufacturing and large-scale manufacturing sectors – minus 0.7 percent and minus 2.5 respectively – with 0.1 percent growth in industrial sector.

Meanwhile, the overall growth rate set at 2.1 percent, the government believes that agriculture would grow at the rate of 2.9 percent, livestock at 3.5 percent and services sector at 2.8 percent.

Meanwhile, the duty on imported cigarettes and brewages has been increased to 100 percent and 25 percent respectively.

However, the traders are now allowed to have transactions of up to Rs100,000 without computerised national identity card (CNIC).

In reaction, the federal government employees have announced to observe a strike against the government’s decision not to raise their salaries.

Earlier Adviser to the Prime Minister on Finance and Revenue Dr Abdul Hafeez Shaikh has already termed the budget as ‘corona-budget’.