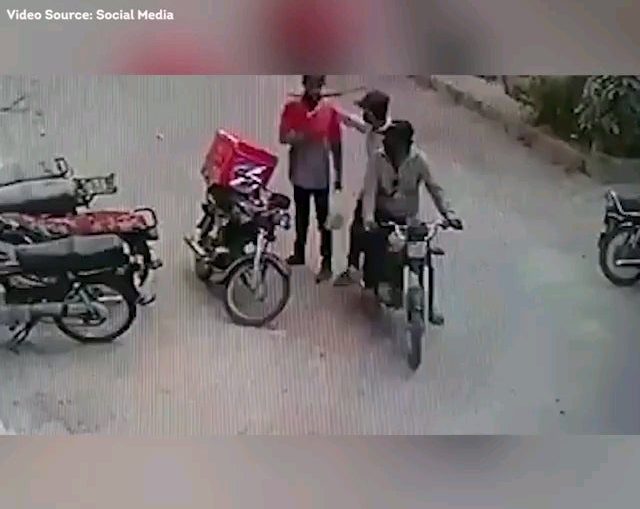 In a rare sight, robbers in Karachi decided not to rob their target – a delivery boy – in what appeared to be a change of heart regarding his valuables, according to a recent CCTV footage making rounds on social media.

In the video, the delivery boy of a popular delivery app can be seen being mugged by two men on a bike in a street of the metropolis.

The footage showed the delivery man returning to his bike after performing a successful delivery. However, when he approached his bike he was held at gun point by the dacoits who took away his money, phone and other valuables.

As soon as his valuables were taken from him, the delivery boy could be seen crying and saying something to the robbers. At this, the robbers returned all the valuables they had stolen from the rider and hugged him.

Both the robbers hugged the delivery boy and could be seen consoling the food delivery rider and soon left the crime scene. The delivery rider also sat on his bike and departed from the scene after getting hold of his nearly-snatched items.

The video soon went viral on social media with police officials confirming that the video was of Karachi. However, they are yet to identify in which police station’s jurisdiction the crime occurred.

According to a report published in April, the number of street crimes in Pakistan’s southern port city have risen despite police and Rangers setting up checkpoints for snap-checking amid the coronavirus lockdown in Sindh.

Dozens of Karachi citizens were mugged, losing their mobile phones, cars, and motorcycles since March 20. According to a police report comprising data from March 20 to April 7, at least 379 mobile phones and 31 bikes were snatched, while 1,049 robberies took place.

The 19-day period includes the 16-day lockdown as well.

During the lockdown period, three cars were stolen and 28 robberies occurred, according to official information. However, CCTV footage of robberies at retail shops and stores in various markets have continued to surface.

On a positive note, bank robberies and other serious crimes amounted to zero.

Karachi police chief Ghulam Nabi Memon had told Geo News that the authorities were responding rapidly to all alerts and information pertaining to street crimes on their helpline 15.