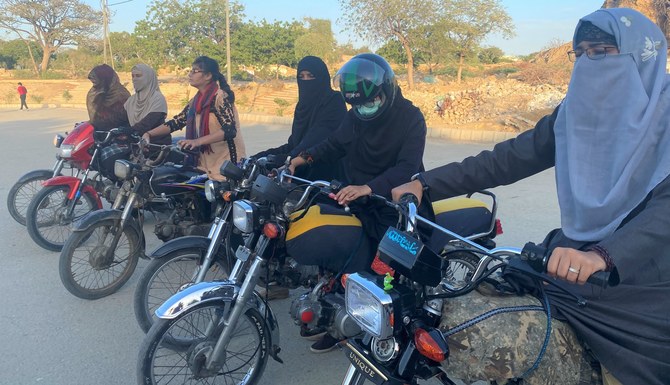 Deputy Superintendent Police Nadeem Ahmed, who took the initiative, told Arab News that he came up with the idea while he was on a United Nations deputation in Indonesia and thought that Pakistani women should also get a chance to be self-reliant like Muslim girls in the far eastern country.

However, he decided to implement his plan when he realized that most policewomen were facing transportation issues in the country’s most densely populated metropolis.

“In view of their situation, we decided to convince and motivate them to join a motorcycle training program. They all showed great excitement,” he said, adding it was not easy to learn how to ride a motorbike.

It used to take her more than two hours to reach the office in the morning, but Afshan Murtaza, a female police constable who lives in Karachi’s suburban Steel Town neighborhood, can now only arrive more quickly at the Farozabad Police Station on her motorbike and travel with greater convenience.

But it is not just about the shorter duration or superior comfort of the journey, Murtaza says that covering the 32-kilometer stretch between her home and the workplace now adds to her self-esteem since she feels more empowered and self-reliant.

Murtaza is among the team of seven police constables who are teaching other colleagues how to ride a motorbike after successfully finishing the training program initiated by the chief of police at the Farozabad subdivision. The program was initially launched to benefit policewomen working in the same precinct, but it is now open to female cops across the city.

A lot of trainees got injured in the beginning, recalled the police officer while praising their courage and determination.

He added that the idea was to empower these women.

“The government should step up to the task and ask banks to provide scooters to Pakistani women on easy installments with no mark-up,” the officer said.

He also noted that the COVID-19 pandemic had helped the training program gain momentum.

“Our trainees are more comfortable when there is less traffic on roads. In the final phase, they are required to drive around on busy thoroughfares. Right now, less traffic and empty parks are a blessing in disguise,” he added.