Skip to content
You are here
Home > Life > Who is “Bashir Zeb”? Suspected Mastermind Behind PSX Attack 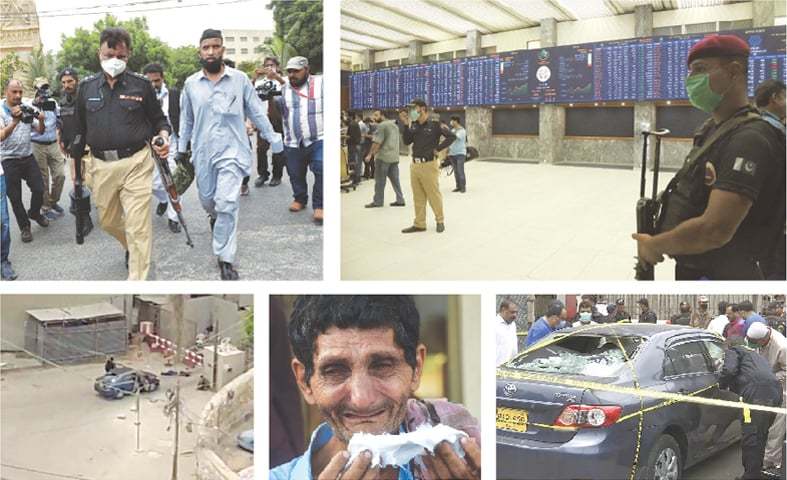 The terrorist attack on the PSX was foiled when law enforcers killed all the four terrorists in just eight minutes. A police officer and three security guards were martyred in the incident.

The Baloch Liberation Army (BLA) has carried out two major botched terrorist attacks in Karachi within a span of around one-and-a-half-years. Earlier, the group had launched a similar attack on the Chinese consulate in November 2018.

“BLA commander Aslam alias Achchu was the mastermind of the Chinese consulate attack, who was killed in Afghanistan by security forces a month after the Chinese consulate attack,” a source said on Tuesday. “Now after the Achchu’s death, his brother Bashir Zeb is in the driving seat of the BLA and was the mastermind of the recent attack on the PSX.”

“Bashir Zeb has taken over the command of all BLA operations since the killing of his brother, Aslam Achchu,” senior counterterrorism officer Raja Umer Khattab said while talking to The News. “Apart from RAW, a foreign spy agency could have been behind the attack as their [attackers’] uniforms also suggested it.”

Aslam Achchu was injured during an attack on his residence in Kandahar when a meeting of terrorists was underway. He was shifted to hospital where he succumbed to his injuries. Achchu was wanted for many heinous crimes, including the attack on the Chinese consulate in Karachi, and he had been carrying out terror activities in Pakistan from Afghan soil.

The investigators also believed that the attackers were using the latest firearms, including the Nato supply weapons, during the attack as 40 Russian rifle grenades, one rifle, 25 Russian and American hand grenades, four sub-machineguns, 26 packs of sub-machinegun bullets and 12 empty boxes of two types of grenades were recovered from their possession.

When contacted, Additional IG Counter-Terrorism Department Dr Jamil Ahmed said foreign weapons which were particularly used in Afghanistan had been used in the PSX attack. He said the terrorists used the Lyari Expressway to reach the PSX and purchased a car from Karachi six days ago.

The route to PSX

It has been learnt that the attackers used the Lyari Expressway to reach the Pakistan Stock Exchange and wanted to cause massive bloodshed while entering the building, but luckily they failed.

It has also been learnt that the attackers drove onto the Lyari Expressway from the Gharibabad interchange and came to the Mauripur interchange.

A day after the botched attack on the PSX, the Counter Terrorism Department of the Sindh police registered a case (No. 79/20) at CTD Civil Lines on behalf of Mithadar SHO Rizwan Patel.

Police have included the provisions of the Anti-Terrorism Act, the Explosives Act, murder and other offences in the FIR. In the case, the serial numbers of the sub-machineguns found on the terrorists have also been registered while two mobile phones seized from the Stock Exchange premises, one an Android phone and the other a simple one, have been mentioned in the FIR.

The terrorists purchased the car they had drive to the PSX from a showroom on Khalid Bin Waleed Road about six days ago. The car was purchased with cash by Salman Hamal. The showroom owner had refused to sell the car without transferring it. Upon his refusal, Salman Hamal gave the owner a copy of his CNIC and then purchased a car.

Sources said that the logistical support was provided to the attackers in Karachi. The investigators suspected that the attackers wanted to hold the employees of the PSX hostage at gunpoint after entering the building.

Strict security arrangements were made around the PSX during the corps commander’s visit. The corps commander met officials of the Pakistan Stock Exchange and discussed with them Monday’s incident.