Skip to content
You are here
Home > Life > COVID-19 > In a First For Pakistan, Sindh Province Starts Mass Coronavirus Screenings in Prisons 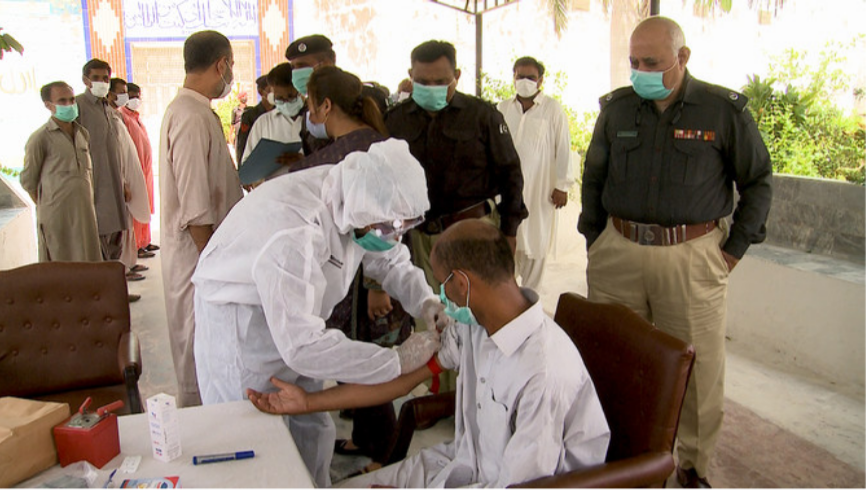 Detention facilities in the province are beyond their capacity, with over 17,600 people incarcerated in 24 prisons that can accommodate 13,000 inmates. Half of Sindh’s prison population is housed in two penitentiaries of Karachi. It was confirmed by officials in late June, that at one of them — Karachi Central Jail — a quarter of prisoners tested positive for COVID-19.

“This is a big problem for us. They are hugely overcrowded and it’s very difficult to manage them,” Kazi Nazeer Ahmed, the inspector general of prisons’ police in Sindh, told Arab News, as he explained that the mass testing program will help him and his team make “informed decisions” regarding coronavirus response.

“We were a bit worried that COVID-19 might spread like a wildfire in such a situation,” Dr. Rafiq Khanani, president of the Infectious Disease Society of Pakistan who oversees the testing program, told Arab News.

As inmates are a highly vulnerable group, he said, antibody tests are being conducted to determine their exposure to the virus. “In any public health situation, it’s checked how many people are getting exposed to a virus or disease and how many of them acquire immunity.” Those who have developed antibodies, he added, are immune and “they are unlikely to get the disease within the next few months.”

The information will allow prison authorities to determine which prisoners are safe to interact with people, Khanani said, “Similarly, the staff that has been exposed and immune can be put on the task of dealing with people. If one is vulnerable, he cannot be put on those tasks.”

But not every inmate will be tested. “We have determined the sample size for each prison and we are not testing everybody, but we are testing according to the sample size that is required for extrapolation of data,” the doctor explained.

The program is already underway in Karachi and on Thursday kicked off at Hyderabad Central Jail with a briefing for prison police and health staff on how to conduct tests and prevent infection.

“There were many things regarding the virus which worried us. But after attending this session, many things got clear,” said Dr. Adeel Shehzad Memon, a senior medical officer at the prison, which is the province’s second largest.

Dr. Arfana Khan, medical chief of Hyderabad’s women’s penitentiary, said the tests will not only help protect the physical health of inmates, but also ease their anxiety.

“A staff can go outside and get tested, the inmates cannot. The coronavirus has not only affected them physically, but also tortured mentally.”

The month-long mass testing and training program, which will cover all penitentiaries in Sindh, is run by the prisons’ police inspector general and Legal Aid Society in collaboration with Nawan Laboratories, Advanced Lab, and French epidemic control experts Z&Z Consultants.

“This is the first time in Asia and first time in Pakistan that this sort of program has taken place,” said Ehsan Naseer Awan, managing director of Nawan Laboratories.

Reports will be shared with prison authorities across the country, he said, “I hope other provinces will learn from us and act upon it.”