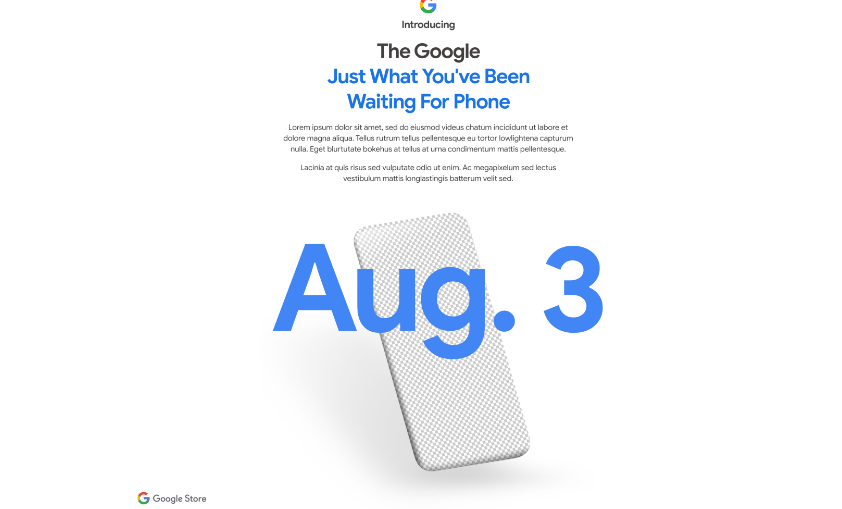 We have lost count of the number of leaks Google‘s upcoming Pixel 4A has featured in. Yet Google has remained mute about the next-gen mid-range smartphone. Well, until now.

The tech giant has released a placeholder text (Lorem ipsum) which teases what we are positive is the Pixel 4a on the Google Store.Also, the header images of the “Made By Google” Twitter and Facebook pages were updated recently. The new photo has a white background with a black hole-punch in the top-left corner. This obviously points to the Pixel 4a which has a punch-hole selfie camera at the upper left corner.

The Twitter handle even got renamed to “The Google RTing, Meme Loving, Info Sharing Stream.” It also contained a link to a new Google Store landing page with an Easter Egg that reveals an August 3rd date. You’ll have to tap the boxes until they match the Google logo’s ordering of blue, red, yellow, blue, green, and red. The text then reads: “The Google Just What You’ve Been Waiting For Phone.”

Further, on the lorem ipsum landing page, there is a phone-shaped object which is covered in a checkerboard pattern that matches the Pixel 4a. The text above the phone-shaped object has several texts which are not in Latin, with words such as camera, Night Sight low-light capabilities, bokeh, megapixel, and longlasting battery, clearly confirming this refers to the Pixel 4a.

You definitely should take this as a confirmation that the Pixel 4a is launching on August 3 and should block the date on your calendar.