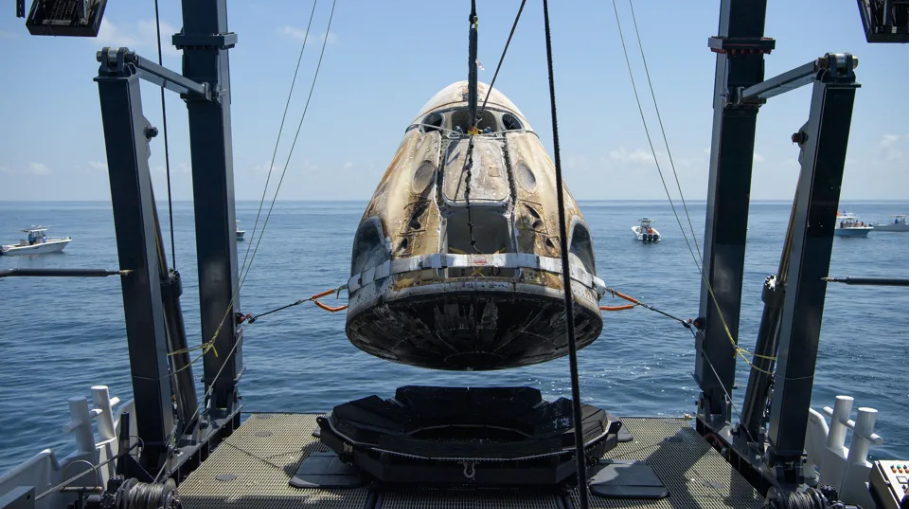 Back at the end of May, SpaceX became the first private company to launch NASA astronauts into space. Now, astronauts Bob Behnken and Doug Hurley are back home.

In a process that kicked off on Saturday, Aug. 1, Behnken and Hurley made preparations for their return trip aboard the SpaceX Crew Dragon capsule that carried them to the International Space Station on May 30. The capsule’s Sunday afternoon splashdown marked the end of the company’s first successful crewed mission.

The two astronauts boarded the Crew Dragon capsule and secured themselves inside on Saturday afternoon. In the hours that followed, they undocked from the ISS and continued to orbit the Earth as the capsule slowly moved away from the station to prepare for a descent into the atmosphere.

The quiet period spanning Saturday night into Sunday afternoon ended shortly before 2:00 p.m. ET, when the capsule started making its final descent back to Earth. During that final leg of the journey, the capsule jettisoned unnecessary components (that burn up during re-entry) and, not long after, released a series of parachutes to keep the speed of the descent under control.

The capsule splashed down somewhere off the coast of Florida, in the Gulf of Mexico near Pensacola at 2:48 p.m. ET. A number of possible landing sites were selected, but with a hurricane (or a tropical storm at the very least) approaching Florida’s east coast, the Pensacola site made the most sense.

How fast will the @SpaceX Dragon splash down?

The spacecraft's parachutes will slow it down to about 15 mph (24 kph). That's a slowdown from the 17,500 mph (25,000 kph) they were traveling while orbiting Earth. pic.twitter.com/NanuNZ5vvU

"Thanks for flying @SpaceX."

A 2:48pm ET, @AstroBehnken and @Astro_Doug splashed down, marking the first splashdown of an American crew spacecraft in 45 years. #LaunchAmerica pic.twitter.com/zO3KlNwxU3

Our recovery teams are making sure that there are no poisonous fumes around the capsule, both for the safety of @AstroBehnken and @Astro_Doug and the people recovering them from the water. #LaunchAmerica pic.twitter.com/iUZDb957Kl

Scorch marks are seen on the outside of the @SpaceX Dragon Endeavour as we prepare to open the hatch. #LaunchAmerica pic.twitter.com/dTu8blQkHK