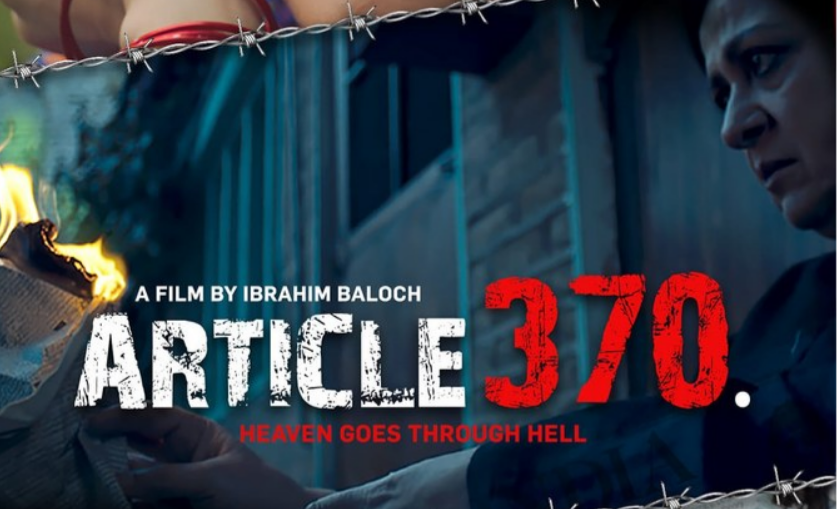 Pakistani writer and film director, Ibrahim Baloch, is poised to release a short film on Wednesday about a married Kashmiri woman whose life is shattered after the administration in New Delhi abrogates Article 370 of the Indian constitution on August 5, 2019 and strips the disputed Kashmir region of its autonomy, putting the region under lockdown.

Talking to Arab News, Baloch said he wanted to release the film, ‘Article 370,’ on the first anniversary of India’s unilateral decision to integrate the internationally recognized disputed Himalayan territory with the rest of the country.

A poster of ‘Article 370’, a short film written and directed by Pakistani Ibrahim Baloch and released on August 5, 2020 to mark the one year anniversary of India stripping the autonomy of Jammu and Kashmir. (Photo courtesy: Ibrahim Baloch)

“I started following the situation in Kashmir after India announced its decision and realized that it was primarily debated from a political perspective,” he said on Tuesday. “I was more interested in the human side of the issue. So after doing some research, I came across stories of Kashmiri women in Srinagar who gave birth during the lockdown imposed by the Indian administration.”

Article 370 of India’s constitution promised special status to Jammu and Kashmir, providing a semblance of autonomy to the region. However, India revoked the provision last year, giving Baloch the idea of working on a story on the only Muslim-majority region under India’s rule.

Shot in the part of Kashmir administered by Pakistan and called Azad Kashmir, Article 370 focuses on the life of Gul-e-Rana, a married Kashmiri woman.

Talking to Arab News, Mariyam Nafees, who played the lead role, said that she was deeply inspired by the story.

“This film depicts the reality and current situation of Jammu and Kashmir,” she said. “The twenty-minute visuals in the movie that show the suffering of a family in the region are full of human emotions. Projects like these are not undertaken too often.”

“Gul-e-Rana is a pregnant woman who goes through a tough situation while waiting for her husband during the lockdown,” Baloch said. “I am confident that this film will resonate with people across the world since it projects a human story. Our aim was not to take sides but to highlight the plight of the people by telling their tales passionately.”