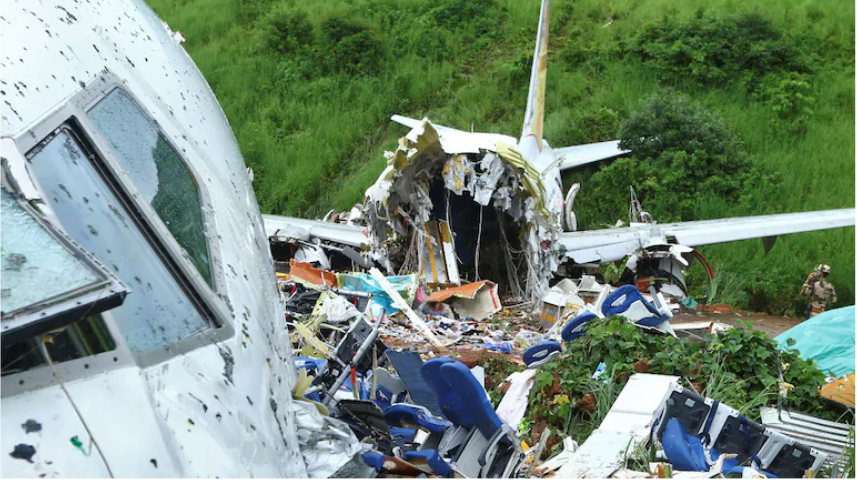 At least 18 people were killed and more than 100 others injured when a passenger jet skidded off a hilltop runway after landing in heavy rain in the southern city of Kozhikode in Kerala.

Some 127 people were being treated at hospital, he said. An investigation will be launched to determine the cause of the crash.

Local TV news channels showed passengers, some of them lying motionless on stretchers, brought into a hospital surrounded by health workers wearing masks because of the COVID-19 pandemic.

TV visuals showed the aircraft’s nose smashed into a brick wall, with much of the middle of the plane pulverised.

Passenger Renjith Panangad, 34, recalled the plane touching the ground and then everything went “blank”.

“After the crash, the emergency door opened and I dragged myself out somehow,” he told AFP news agency from a hospital bed in Kozhikode. “The front part of the plane was gone – it was completely gone. I don’t know how I made it but I’m grateful. I am still shaken.”

The Air India Express flight from Dubai to Kozhikode, also called Calicut, was repatriating Indians stranded overseas amid the coronavirus pandemic. The plane was carrying 190 passengers and crew, the Ministry of Civil Aviation said in a statement. Among them were 10 infants.

18 people, including two pilots, have lost their lives, it is unfortunate. 127 people are at hospitals, others have been released: Hardeep Singh Puri, Civil Aviation Minister on #AirIndiaExpress flight that crash-landed at Kozhikode International Airport in Karipur yesterday pic.twitter.com/af6xGMdKEr