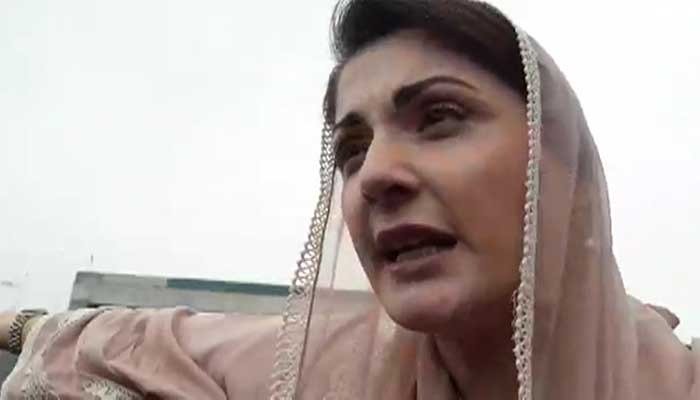 The Punjab government on Tuesday said action will be taken against those involved in stone-pelting and damaging state property outside the Lahore office of National Accountability Bureau (NAB) at the time of Maryam Nawaz’s appearance in a land purchase case.

Punjab Minister for Law Raja Basharat said PML-N has repeated its “history of attacking the Supreme Court”, adding that constitutional institutions and law enforcement agencies are not safe from the PML-N’s “hooligans”.

Maryam Nawaz was summoned in an individual capacity, but she brought a rally here, Basharat said.

“The government took all measures to establish its writ and action will be taken against all those who gathered there illegally and those who pelted stones at police officers stationed there,” he said.

Basharat said that stones were brought under the security protocol of Maryam. After reaching the area, they were distributed among workers and thrown at NAB and police.

Police attacking my car. Imagine if it were not a bullet proof vehicle. Shame. pic.twitter.com/VtQLJlXFhr

“Maryam claims that she was summoned to cause her harm, no. You were called to answer for the crimes you have committed,” he said.

Some unidentified people have been arrested, while others are being identified through CCTV footage. “Cases will be registered against PML-N workers who injured police officers and caused damage to government property.”

“This is not a claim anymore everything was shown on the media. The government will take its case forward on the footage provided by media,” he said.

Action will be taken against all those nominated, arrested, and others involved, as it is the responsibility of the government to do so.

“All of this was done on the behest of Maryam,” he added.

Punjab Minister for Information Fayyaz ul Hassan Chohan said that for the first time in 20 years since the establishment of NAB, the glasses of the anti-graft watchdog’s building have been broken and that Maryam has carried forward her family’s traditions of “launching attacks” against LEAs.

Maryam’s move is the outcome of the internal politics of her party. “Neither will I play, nor will I let anyone play, this is what Maryam had in mind when she came [to appear before NAB],” he said.

The minister claimed that this act was a “suicide attack” on Shehbaz Sharif and Hamza Shehbaz’s politics, and she has “ended the politics of PML-N”.

Chohan claimed that nearly Rs1 million were distributed among people at Jati Umra.

“Every worker who pelted stones was awarded Rs25,000, those who threw stones at Maraym’s car were given Rs100,000 in advance,” he said, adding that all of this was done on Pervez Rashid’s advice.

“It took them eight days to come up with this plan as none of their workers — except for 30, 40 — were ready to partake in the rally today,” he said.

“Maryam’s negative personality, approach, school of thought has led to the decline to Sharif family’s politics, business, government, and respect,” he said.

Responding to Maryam’s press conference, he said that she had raised the issue of Kashmir as her politics had “failed”.

Lambasting the government for the violence against the PML-N workers earlier in the day, former foreign minister Khawaja Asif said that thousands of people who had gathered near the NAB office would have been dispersed peacefully if Maryam was allowed to appear before the court to record her statement.

“Our party workers were ruthlessly attacked with teargas and stones,” he lashed out.

Noting that there is usually a heavy contingent of police deployed near the office already, the PML-N stalwart said: “Who would dare to engage in violence in the presence of security forces. The Punjab government deteriorated the situation.”

The PML-N leader went on to add that the rest of the opposition leaders have also condemned today’s incident and demanded that the detained workers be freed.

“If nothing will be done to counter the current situation, then the incumbent government will be responsible for the consequences,” he added.

Responding to Asif’s allegations, Foreign Minister Shah Mehmood Quereshi said that the question is why did such an incident happen in the first place?

“There should be an investigation of the incident. I don’t think that the Punjab government or anyone else benefited from it,” he said, adding that police are usually hesitant to get involved in such an incident.

The federal minister then said that other leaders have been appearing before the accountability watchdog in the past but no such incident ever took place, therefore, today’s incident should be thoroughly investigated.