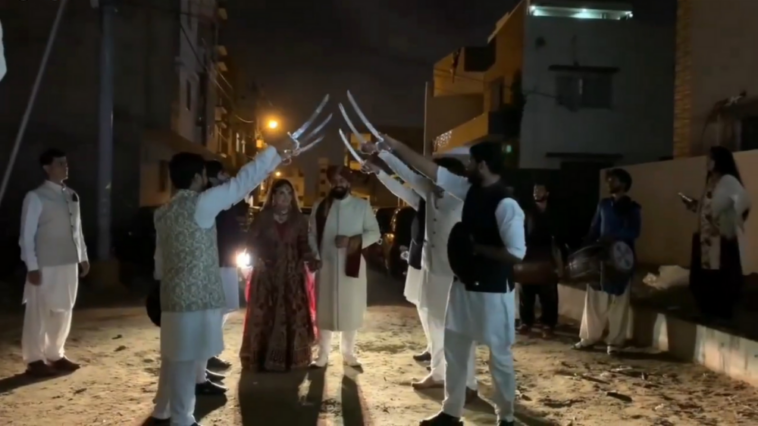 We have seen various phases of the ‘Ertugrul‘ craze in the past few months, including a massive statue of the warrior in Lahore. However, this obsession is also finding its way into Pakistani weddings.

No, marriage halls aren’t getting huge statues, but the people are rather bringing the ancient Ottoman culture to their weddings.

Recently, a group of young men welcomed a newlywed couple by presenting a sword dance, just like the one we saw in Ertugrul.

The dance was definitely inspired by the wedding traditions of Kayi tribe, which Ertugrul belonged to.

This wedding dance can be observed in the initial episodes of the series, where Ertugrul’s friends and relatives welcome him and Halime for the first time after they got married.

This Pakistani married couple, also received a similar welcome, except that there was only a group of 6 friends and cousins of the groom.

The young men can be seen chanting their names while holding swords and shields. Social media seemed to enjoy this video and it is already going viral.

We suppose, the next Ertugrul inspired wedding might be a surprising event with all the costumes and an actual set up from the drama. We can’t say it’s completely impossible because Pakistani fans can go to any lengths to express their love for the Turkish series.