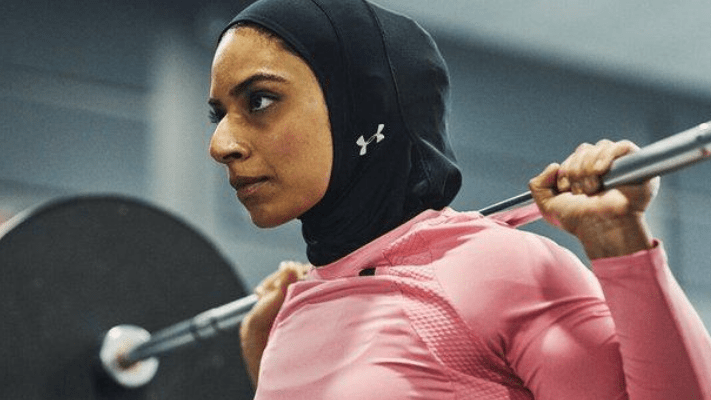 Aimed at Muslim athletes, the head covering has been designed in conjunction with sportswomen around the world, including the face of the advertising campaign, Saman Munir.

Announcing the launch on Twitter, the company’s chief executive, Patrik Frisk, said: “Every athlete should have the gear she needs to be the best. The Under Armour Sport Hijab was developed with the help of hijabi athletes from around the world.”

Every athlete should have the gear she needs to be the best.

The Under Armour Sport Hijab was developed with the help of Hijabi athletes from around the world including Saman Munir (@makeuphijabs): https://t.co/lwsKPDoCCL pic.twitter.com/eOaYJGQ1iu

Made from specially constructed hex-shaped mesh fabric to wick away moisture and offer optimum breathability, it is also cut extra long so it will not ride up or come untucked during workouts.

With four-way stretch fabric for a perfect fit, it has easy headphone access and the logo is fully reflective, making it ideal for women looking to use it for evening road running.

In a statement, Jennifer Smith, senior designer at Under Armour, said the design was “rooted in functionality and performance”.

“Our team worked diligently to launch a quality sport hijab that will meet the performance needs of its user and ensure all female athletes are covered from head to toe no matter their size, level of performance or religion.”

Munir was already well-known for her social media make-up tutorials, which she made for more than a decade, but two years ago, the Canadian’s career shifted when she began posting her workouts, all completed while wearing a hijab.

Now a qualified personal trainer, the mother of three is the first hijabi athlete to be sponsored by Under Armour.