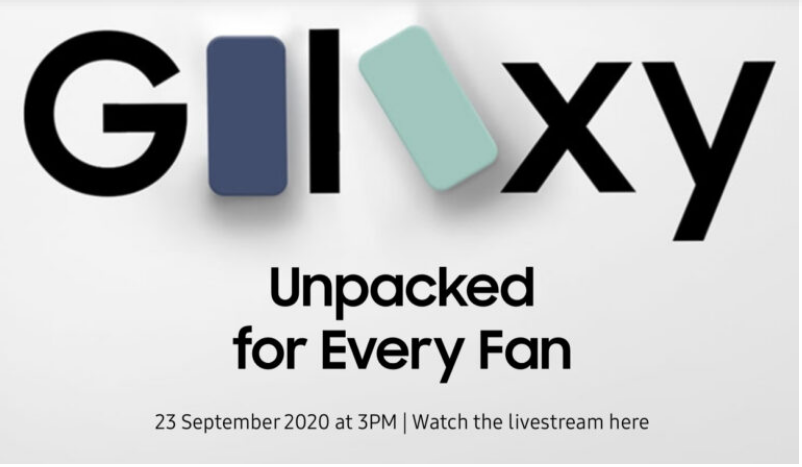 After so  many reports, rumors, and leaks, Samsung has officially announced to launch the  Galaxy S20 FE on September 23. This device was previously known as Galaxy S20 Lite. The launch promo for this device was first spotted on Samsung UK official website by Max Weiinbach of Android Police who shared it on Twitter. The South Korean tech giant is calling the event “Galaxy Unpacked for Every Fan”.

The handset is said to come in two variants – 4G & 5G. The former will  be powered by Samsung Exynos 990 SoC, whereas the latter is said to feature Qualcomm Snapdragon 865. Surprisingly, it may come only in single storage configuration – 6GB + 128GB (UFS 2.1) with support for microSD card.

The phone’s back material is unknown but its frame is claimed to be metal. Talking about the device’s rear panel, it will sport a 12MP (wide, OIS) + 12MP (123 ultra-wide) + 8MP (3x telephoto, OIS) triple camera setup. Whereas, the front punch-hole will house a 32MP selfie camera.

The Galaxy S20 FE will either run One UI 2.1 or 2.5 out of the box backed by a 4,500mAh battery with support for 15W fast charging, wireless charging, and reverse wireless charging. It will be also IP68-certified for dust and water resistance.