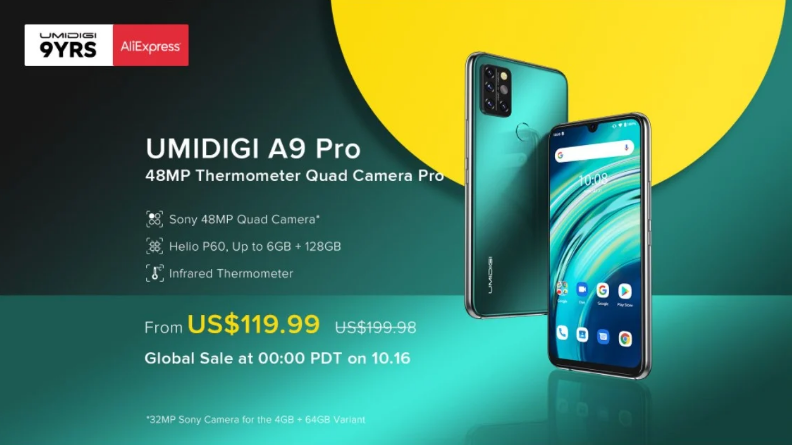 Chinese smartphone maker UMIDIGI has launched a new budget smartphone, the A9 Pro. Touted to be a pro in camera, the device has a Sony sensor on both the rear and front camera setups. The phone starts at an aggressive price of $119.99 and will go on sale from October 16 at 00:00 PDT.

UMIDIGI A9 Pro Price, and Availability

UMIDIGI shared a product video along with a press release to highlight the features of the A9 Pro. The device looks just like any other entry-level UMIDIGI smartphone.

The company says it is a direct successor to the UMIDIGI A7 Pro that launched a few months back. The new budget smartphone will be available on AliExpress starting from October 16th.

UMIDIGI is also running a global giveaway of 10 A9 Pro smartphones. It will run for the next 20 days and there are 13 different ways to enter the giveaway. A few of the rules where users need to:

There are 10 other entries. You can click here to check and enroll for the giveaway.

The entry-level device features a 6.3-inch FHD+ display with 2340×1080 pixels and 2.5D glass a water-drop notch. The power and volume buttons are on the right, while the left has a dedicated shortcut key(Temperature measurement/PTT) and SIM Card slot.

The rear panel has a fingerprint sensor and a quad-camera layout. Powering the device is Mediatek Helio P60 SoC along with Mali G72 MP3 GPU. The device is available in two storage variants- 4/6GB LPDDR4x RAM and 64/128GB UFS 2.1 storage respectively.

At the back, it has a rectangle camera layout with four sensors. The main lens is a 48MP f/1.79 Sony sensor. However, this is found only on the 6/128GB variant. The 4/64GB model has a 32MP Sony sensor. Other lenses are the same on both which include 16MP 120° FOV ultra-wide, two 5MP depth, and macro sensors. Front has a 32MP selfie shooter.

Additionally, A9 Pro also has an infrared sensor on the rear panel to measure the body temperature of people without touching them. Other features include 4G, Wi-Fi, Bluetooth 4.2, GPS, GLONASS, Galileo, 4,150mAh battery with 10W charging via USB-C. The device comes in Forest Green and Onyx Black color options.