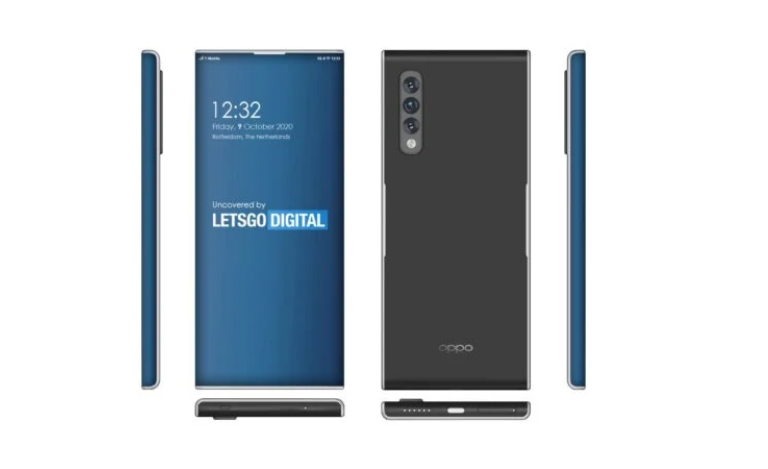 Chinese smartphone makers have recently started launching smartphones with curved displays. On the other hand, Samsung, the pioneer in this design reverted back to flat panels on its premium handsets.

When we think about waterfall displays (super curved), OPPO and vivo are the two companies that come into mind. Now, another design patent for such a smartphone with an under-screen camera by the former firm comes into light.

Like always, the new OPPO design patent for a super curved display smartphone was unearthed by LetsGoDigital. According to the publication, Guangdong Oppo Mobile Telecommunications filed this patent with the CNIPA (China National Intellectual Property Office) at the end of 2019. However, it got approved and published only on October 9.

According to the documents of this patent, OPPO has patented four different smartphone designs with minor differences in their display curves. But only one of them is showcased in color renders. Hence, LetsGoDigital says that it could be the potential design if the company ever plans to release a phone with such a design.

That said, as per this design if this smartphone ever comes into life, the display on it may have 21:9 cinematic aspect ratio like the Xperia 1 II and Xperia 5 II by Sony. Also, since the sides will be engulfed by the screen, the volume buttons will be situated at the back near the end of the display curvature on either side.

Further, the rear panel of the handset will sport a vertically aligned triple camera setup at the top left corner. Whereas, the top side of the phone will house the power key as well as a microphone and the bottom side will include a speaker, USB Type-C port, and a SIM card slot. Interestingly, it may also feature an under-screen camera.

Having said that, we don’t think OPPO will ever launch a super curved display phone with this design since the cameras and the overall design look outdated. That doesn’t mean they will never release such a handset; they may do but perhaps with a slightly different design.