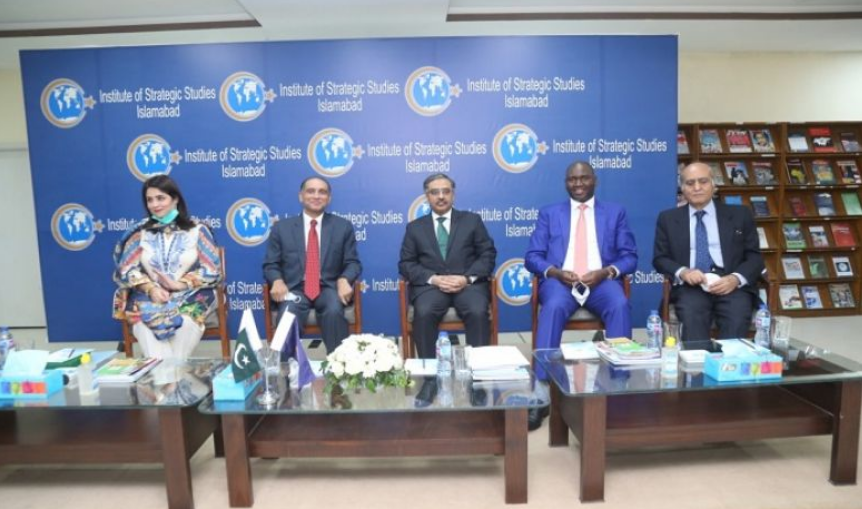 Mr. Sohail Mahmood, Foreign Secretary of Pakistan was the Chief Guest, while H.E. Prof. Julius Kibet Bitok, High Commissioner of the Republic of Kenya & Dean of African Countries’ Ambassadors in Pakistan also made remarks on the occasion.

The newly established Centre at the ISSI aims to promote and provide quality research, analysis, policy input and dialogue on issues related to the Middle East and Africa. CMEA’s functions include observing latest developments, contributing in-depth research and analysis, organizing and promoting dialogue and debate on political, security, economic, and social aspects of the Middle East and Africa countries, with the focus on relevance for Pakistan.

During his remarks, Mr. Sohail Mahmood stated that the Middle East is one of the most critical areas in the world today. Its strategic significance stems from its flow as the major energy supply in the world. The people of Pakistan, share strong linkages with the people of the Middle East region. There are no issues where Pakistan has not stood shoulder to shoulder with the Muslim countries, he said.

Moreover, under its Engage Africa policy, the Government of Pakistan is shoring up its diplomatic presence in this important part of the world and focusing on both connectivity and complementarity. He concluded by expressing that the establishment of CMEA is both timely and beneficial and ensured the support of the foreign office in its future endeavours.

CMEA has a unique significance for Pakistan as the Middle East is a region where Pakistan has huge stakes, especially in the Gulf, necessitating a detailed study of the geo-politics of the region. While engaging with Africa is also one of the top priorities for the Government of Pakistan. He hoped that CMEA would deliver on this front and work closely with the government in this regard.