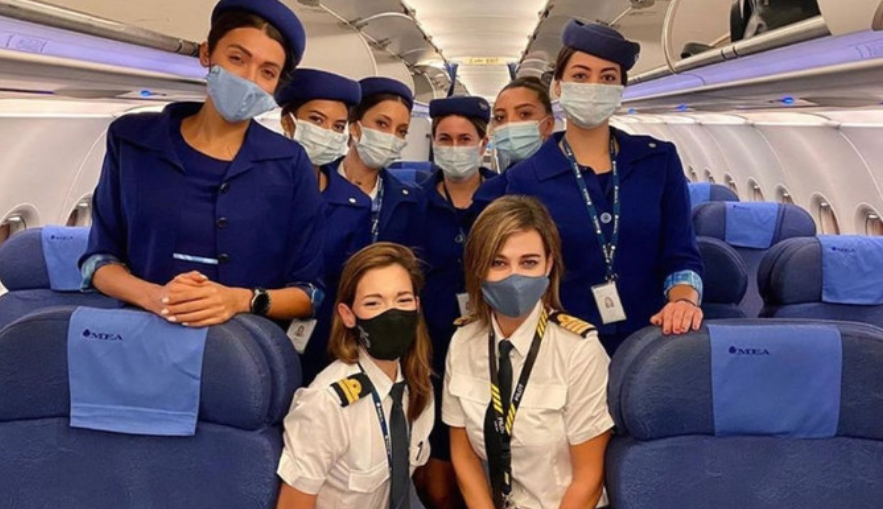 On October 13, an all-female crew staffed a Lebanese Middle East Airlines (MEA) flight for the first time in MEA’s history.

Captain Rola Hoteit piloted the round trip to Cairo and told that it was only once the crew had boarded that they realized the plane was being flown by an all-female staff.

“We were all surprised,” Hoteit said. “Such an arrangement happened by coincidence. We did not know that it was a pioneering event. The computer specifies the work schedule and no one — neither in the management of the company nor in the airport — knew that the crew would be an all-female one. We were very excited. We took a lot of photos since coincidence only happens once.”

The crew consisted of Hoteit, her assistant and six flight attendants. Hoteit posted about the flight on social media on Wednesday and said she cannot believe the amount of positive feedback she has received.

“It was a full plane on the way to Cairo and there were around 100 passengers on the way back to Beirut. However, none of the passengers knew that the whole crew is made up of women only, and we did not inform them that, fearing that some of them might be concerned,” she added. “We did our job perfectly and we later found out, through comments, that people accepted the matter and that everyone is ready to accept change.”

Hoteit has been a pilot for 25 years, and said her ambition has always been to fly with an all-female crew on board. “I had the privilege to be the pilot on Tuesday, with a crew consisting only of women for the first time in Lebanon,” she said. “I expected this event (to happen) on International Women’s Day, for example, as a sign of women’s power in Lebanon and their ability to excel in all areas of work. However, (my) dream was realized by coincidence.”

While women account for more than 50 percent of MEA’s administrative staff, according to airline management, Hoteit is the only female pilot currently on its books, along with six female first officers. Over 85 percent of the airline’s flight attendants are women.

Women also account for 43 percent of students in Lebanon’s military academy and 5.5 percent of soldiers. Five women currently hold the rank of brigadier general, according to Roukoz.