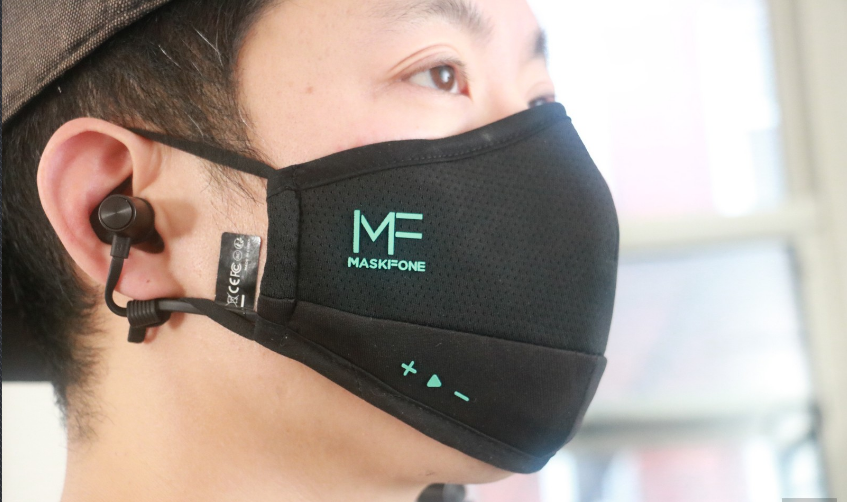 The Maskfone is the latest entrant in this new category of wearable devices and the company markets it as the “world’s first face mask with wireless headphones built in.”

But it’s not. The headphones are not so much built in as they are simply tucked in, which makes sense — you’d want to remove them to wash the mask. Still, the Maskfone seriously skirts the boundaries of the definition of a gadget because it really is just a washable face mask with a pocket. Open the velcro attachment and you’ll find the included wireless necklace-style earbuds.

It’s not even a special pair of headphones, either. The Maskfone ships with a Motorola-branded headset that’s very similar to the Verveloop105 fitness earphones, though the exact model here is unknown. You’ll even hear the iconic “Hello Moto” when you turn the device on.

What’s also confusing are the faux buttons on the front of the mask. There are icons for “+,” “-” and Play, and though they look like they’re built into the fabric, they’re actually more like iron-on patches that don’t do anything.

You have to make sure the headphone’s controller in the mask’s pocket lines up neatly under these symbols. Though you could also just press the buttons under the fabric if they’re misaligned — the graphics on the mask do literally nothing.

The main benefit of Maskfone’s headphones being removable is that you can wash the mask and reuse it. The company also includes five N95/FFP2 or PM2.5 filters that you can insert, which makes it feel like a slightly better value.