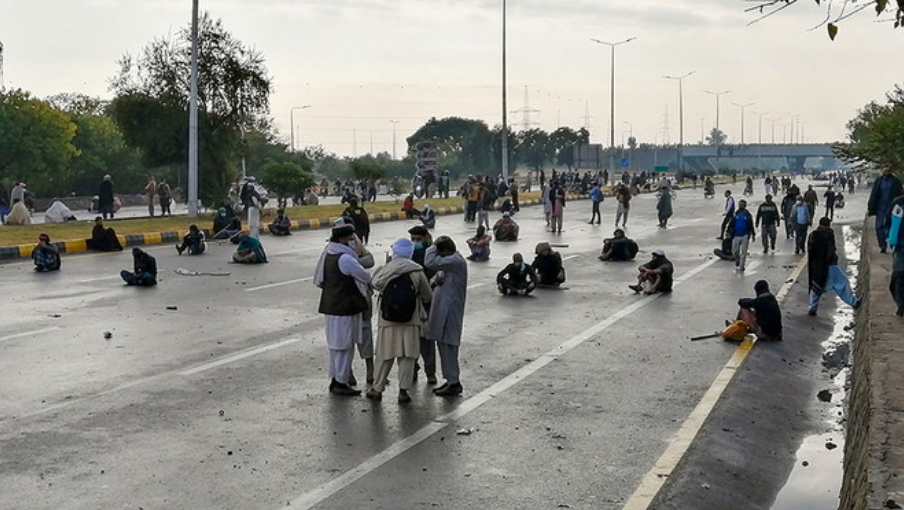 Traffic police has issued a diversion plan following Islamabad and Rawalpindi witnessed a massive traffic jam due to a sit-in by the Tehreek-e-Labaik Pakistan (TLP) at Faizabad Interchange.

Several people were stuck in long queues of vehicles on major thoroughfares of the twin cities as the traffic gridlock piled misery on commuters.

Authorities have installed blockades at the entry points of the capital to stop the protesters from entering the city.

As per the traffic plan, Faizabad Interchange has been closed for traffic and the metro bus service between the twin cities suspended.

Jinnah Avenue from Kalsoom Plaza to Express Chowk is also closed for traffic.

Masses are advised to use Nazimud Din and Margalla roads instead. Fazl e Haq road is also closed and citizens can use Luqman Hakeem road as an alternate route.

Zero point to Faizabad road is closed with people advised to use Kashmir Highway Ninth Avenue and IJP road. Khanna Pul to Faizabad Express Highway is also closed from both sides as people travelling to Islamabad from Koral can use Khanna Pul to Lethrar Road and Tramari Park Road.

Ninth Avenue IJP to Faizabad road is closed, due to which people can use IJP road via Gohar Shaheed Chowk and Gandum Godam Chowk.