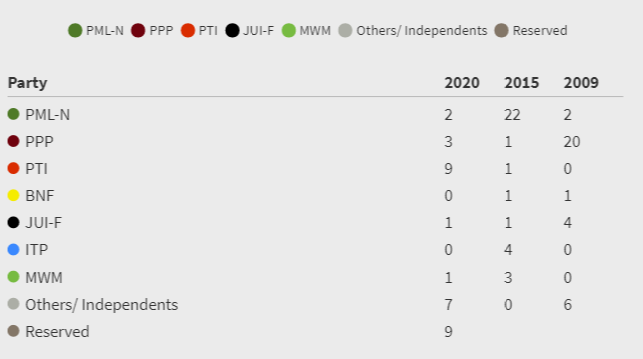 Prime Minister Imran Khan-led Pakistan Tehreek-e-Insaf (PTI) emerged as the leading party after it bagged eight out of the 23 Gilgit Baltistan (GB) Legislative Assembly seats in the elections on Sunday.

According to the unofficial results, the PPP came in second by securing three seats, while the PML-N secured two seats. JUI-F and MWM secured one seat each. Seven seats went to independent candidates, who are expected to play an important role in the formation of the next GB government.

The result of GBA 18 is delayed where PTI’s Gulbar Khan was leading.

PPP GB President Amjad Hussain Advocate managed to win from two constituencies — GBA-1 Gilgit-1 and GBA-4 Nagar-1. It is for the first time that any candidate has won two seats in the regional election.