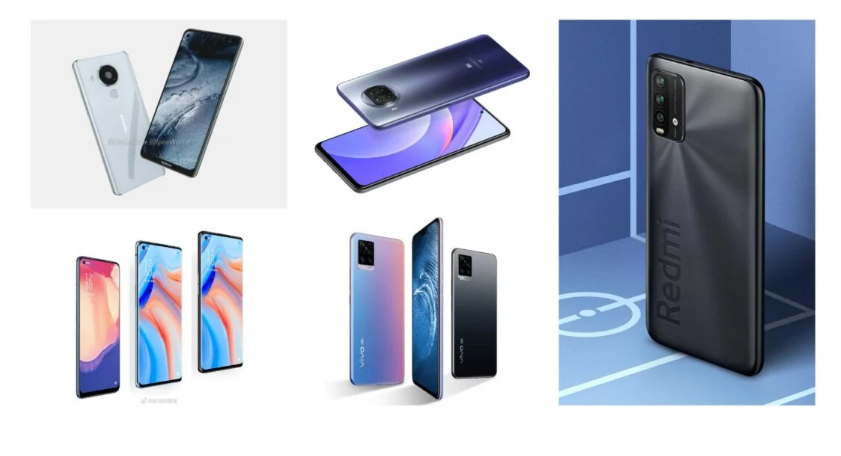 November had quite a bit of launches from companies like ZTE, Samsung, OPPO, and the most expected Redmi’s Note9 series. Although we are officially into the last month of 2020, companies aren’t holding back or relaxing a bit. Thus, let’s look at the upcoming smartphones in December 2020.

The list has names from biggies like Huawei, Lenovo, Samsung, OPPO, Vivo, and more. As always we have included few devices that are speculated to arrive this month at the end.

Representative image of Reno4 Series. Leaks say that the Reno5 series will be similar

Perhaps, the next big launch in China would be the Reno5 series of smartphones. It is rumored to launch on December 10 in China. Anyway, the lineup will likely have three devices- Reno5 5G, Reno5 Pro 5G, Reno5 Pro+ 5G. The entire specs of the device have been leaked ahead of launch.

Reno5 Pro will have similar specs as the Reno5 but a bigger 6.55-inch display, Dimensity 1000+ SoC, and a slightly larger 4,350mAh battery. And as per leaks, the difference between Reno5 Pro and Reno5 Pro+ is a bigger 4,500mAh battery, Snapdragon 865 SoC, and rear cameras. Accordingly, it will most likely include a mysterious Sony IMX7xx 50MP lens, 16MP ultra-wide, 12MP telephoto with 2x optical zoom, and a 2MP macro sensor.

After confirming the arrival of Lemon brand smartphones, Lenovo has confirmed that the Lemon K12 series of smartphones will launch on December 9 in China. The devices are likely rebranded Motorola phones from Global markets. Accordingly, the Lenovo K12 Pro will be a rebranded version of Moto G9, while the K12 will be a rebrand of Moto E7.

Huawei launched the Nova 8 SE back in November. The company is expected to expand the Nova8 lineup and if reports are true it will happen this month. Certifications received an earlier hint that the lineup will include two more devices- Nova8, and Nova8 Pro. The Pro model will likely feature a dual punch-hole display with curved edges. Sadly, not much is known about the series but the Nova 8 could sport Dimensity 820 SoC, rectangular layout with quad-cameras, while the Pro model will have Dimensity 1000+ SoC.

The Honor V40 series was expected to launch last month. However, a lot happened in December and now Honor is no longer a sub-brand of Huawei. Hence, the V40 series could be the first Honor Smartphones after the split. Although it is rumored to launch in December along with the Nova8 series, some reports say that it might get skipped to Jan 2021. The series will have V40 Pro, V40 Pro+. Reports say that both the devices will have a 6.72-inch FHD+ 120Hz display, 50MP Sony IMX700 RYYB camera, 66W wired & 40W wireless charging, 5G, Dimensity 1000+ SoC(V40), and more.

After a lot of delays, Vivo has finally confirmed that V20 Pro will launch in India on December 2. To recall, the device launched back in September in China. The Vivo V20 Pro features a 6.44-inch FHD+ AMOLED display, Qualcomm Snapdragon 765G 5G SoC, 8GB RAM, 256GB storage, triple-camera with 64MP, 8MP, 2MP lenses, and a dual-front camera with 44MP main, and 8MP ultra-wide lens, 4,100mAh with 33W fast charging.

Vivo recently launched the OriginOS in China. It is expected to power the new Vivo smartphones going forward. While the company has opened beta registrations for existing devices, its upcoming Vivo X60 series will likely get it out of the box. Reports say that the series will have Vivo X60, X60 Pro, likely feature Samsung Exynos 1080 SoC, and start around 3,500 yuan($532).

realme’s mysterious RMX3063 device has been spotted on FCC, BIS, EEC certification websites suggesting an imminent launch. It will have a design similar to devices like realme C12, C15, and realme Q2i. It will likely feature a 5,000mAh battery, Bluetooth 4.2, 4G, Wi-Fi 802.11ac support.

Samsung is gearing up to announce the next entry-level M02 very soon in India. And if reports are anything to go by, it might happen this month. The support page for SM-M025F/DS, likely the M02, has already gone live. Considering the early launches, it is speculated that the upcoming Galaxy A02 will land as M02 in India. So far, the Geekbench listing shows it will likely have Snapdragon 450 SoC, 3GB of RAM, Android 10.

Last year, Samsung announced the Galaxy A51, A71 in December. Similarly, the company could launch the next iteration this year as well. So far, the Galaxy A52 and A72 are likely succeeding those devices. Galaxy A52 is expected to feature Snapdragon 750G 5G, 64MP main camera, 8MP unknown sensor, and 3x Telephoto lens. The Galaxy A72, on the other hand, will feature a Penta-camera setup with 64MP main, 12MP ultra-wide, 8MP Telephoto(3x zoom), and two 5Mp sensors, 32MP front camera.

Xiaomi is expected to announce the Mi 11 series- Mi 11, Mi 11 Pro soon after the Qualcomm Summit that will happen on December 1. The device will likely be the first in China to sport the next flagship SoC(likely: Snapdragon 888) of Qualcomm. The Pro device will mostly feature a curved display with QHD+ resolution, 120Hz refresh rate, main camera to take 50MP shots, 48MP ultra-wide, 100W fast charging, and more. Although it is tipped to launch in January, chances are it might get announced in December.

So these were the expected smartphones in December 2020. Which phone are you most excited for?