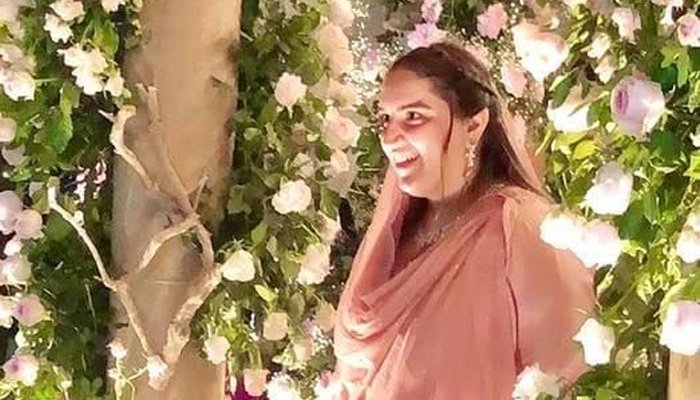 Bakhtawar Bhutto Zardari, the firstborn of former president Asif Ali Zardari and Mohtarma Benazir Bhutto, on Tuesday took to her Instagram page and treated viewers to a glimpse of her fairy-tale-like engagement ceremony which was attended by several bigwigs of the country.

In the 32-second-long clip uploaded to the photo-and-video sharing platform, Bakhtawar can be seen walking alongside her father Asif Ali Zardari, her younger sibling Asifa Bhutto, and her paternal aunt Faryal Talpur.

In the caption, Bakhatwar revealed the details of her wedding dress and makeup, while also acknowledging the crew behind the camera.

In the video, the newly-betrothed Bakhtawar can be seen holding her father’s hand and wearing an ear-to-ear smile as she walks towards the serene garden decorated with flowers where her finance Mahmood Choudhry awaits her.

It seems as if the background score of the video was composed and written especially to celebrate the occasion.

The duo had exchanged the rings as the city’s bigwigs — including business magnates, politicians, and lawyers — turned up at the engagement ceremony at the Bilawal House on November 27.

The ceremony was held in the open area of the Bilawal House. However, Bakhtawar’s brother and PPP Chairperson Bilawal Bhutto could not be present after testing positive for the coronavirus.