Skip to content
You are here
Home > Did You Know! > 12 Disgusting Viral Dishes of 2020, Nutella Biryani to Chocolate Maggi 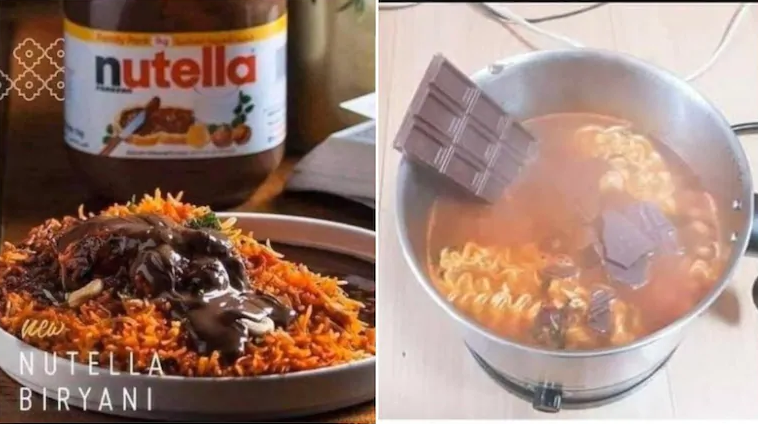 Yes, 2020 was bad. It was terrible. But guess what was even more disgusting? Bizarre, absolutely ridiculous food trends. The internet, actually, enjoys experimenting with dishes but most of them are rather peculiar. For example, Ferrero Rocher Manchurian, or Masala Maggi noodles mixed with curd.

Why? That is the question certain sections on social media are left with after such preparations trended furiously on the internet after making headlines throughout the year. Most of these dishes are primarily a weird mix of sweet and spicy flavours. There was this recipe of Fried Chicken coated with chocolate that went viral. Isn’t that just a destruction of the yummy, juicy chicken recipe? Also, Rosogolla Biriyani. Seriously!

In this piece, we list 12 disgusting viral dishes that will just, plain and simple, make you nauseous.

No, the internet did not spare Maggi noodles as well. @acnymph, a Twitter user, enjoyed an afternoon with a hot bowl of Masala Maggi noodles mixed with curd. “Maggi and curd is food for the soul,” she said in the caption of her post. We are not quite sure about that. Several users did not mind the dish, as it appeared from the comments section, but most others refused to give it a shot.

Almost everybody loves Maggi. We get that. But that doesn’t mean you have to experiment with Maggi noodles to this extent. Last year, it was Maggi cooked like kheer with milk and rose petals. In 2020, people found out that Maggi noodles can be used as a substitute for the aloo mixture in pani puri as well. The viral picture, featuring a puri stuffed with Maggi noodles, was declared “worse than 2020” by the internet. We couldn’t agree more.

Yes, that happened. In June, a Facebook page posted a picture of a plate of biryani served with a layer of Nutella chocolate spread on top of it. Biryani is love. So is chocolate. But, a mixture of both is nothing but a horrific idea.

There you go. Disaster, again. Rahul Passi, a Twitter user, went crazy viral in June after he posted a picture of Chocolate Maggi that he had cooked at home. The image featured soupy Maggi noodles being cooked and two bars of chocolate dunked in the vessel. Oh lord, Twitter said, while several others wished to “unsee” the picture.

It seems absolutely baseless to play around with dishes such as biryani and Maggi noodles. But it is what it is. In October, a food blogger exclaimed in a viral post, “It sounds unbelievable? But I just had the Angoori Rosogolla Biriyani along with Hara Bhara Kebab, Aloo Chaap and Dahi ka Chutney (along with Raita and vinegar-soaked Peyaaz) and Firni.” The picture that she posted is rather scary because it features pieces of Rosogolla mixed with biryani. Disgusting!

No, please. Fried Chicken is just awesome but dipping it in chocolate before frying the juicy pieces of chicken legs is not. Absolutely not. To make the dish, the Twitter user baked chicken drumsticks and dipped them in a chocolate batter and thereafter, fried the chicken pieces in hot oil. We will leave it at that.

2020 started with a picture of Kiwi Pizza that went viral in January. The image featured a large cheese pizza layered with tomato sauce and loads of mozzarella cheese, and kiwi for topping. Do you hate pineapple pizza? If yes, what about this? Despise is the word.ADVERTISEMENT

Sugar laced paratha is fine. It’s really tasty, as a crispy paratha is prepared with sugar crystallized on it. But what is Masala Chai ice cream? That’s absolute nonsense. Well, a Twitter user clearly thought it wasn’t because he tried out a combination of Masala Chai ice cream with sugar laced paratha. Do take a good look at the picture and see whether you wish to try it.

Red Sauce Pasta Dosa, in all honesty, is just too much to digest. In August, a Twitter user posted a video of a man making Red Sauce Pasta Dosa at a roadside stall. The man, at first, spread the batter on a tawa and made the dosa. On it, he added chopped onion, tomato, capsicum, pasta and several types of red sauces along with mayonnaise. He topped it with some cream and mixed the whole thing together to make the pasta filling for the dosa.

Another absolutely weird combination. Chicken Tikka as a snack with chai is fine but what was the need to dip the pieces of chicken tikka in a cup of chai. We really did not get this, neither did the internet. The video of a Reddit user trying out the combo went viral. Watch it at your own risk.

“Gujarat’s answer to Vada Pav is here. Vada Pav in mud,” is the caption that a Twitter user used to describe a video of man from Gujarat making Ice Cream Vada Pav at a roadside stall. In between two slices of pav, he added different flavours of syrup, vanilla ice cream and tutti frutti. Okay, then.

Do you wish to try any of these weird dishes?