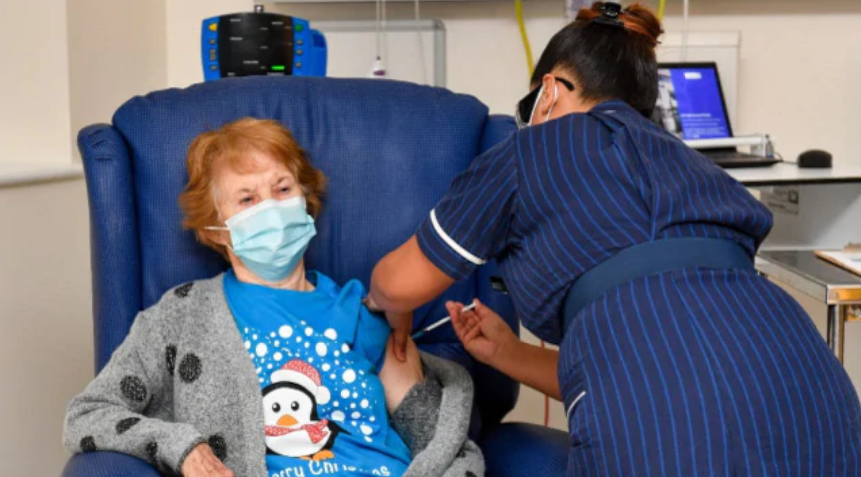 A 90-year-old grandmother, Margaret Keenan and an 81-year-old from Warwickshire named William Shakespeare were the first two people who were administered the COVID-19 vaccine produced by Pfizer-BioNTech.

This marked the start of the biggest vaccination programme in the history of Britain.

Both Keenan and Shakespeare were administered the vaccines at a hospital in Coventry, central England.

Second patient to get the COVID jab at University Hospital Coventry – would you believe it….William Shakespeare from Warwickshire pic.twitter.com/y0LzxgbJ9w

“I feel so privileged to be the first person vaccinated against COVID-19 ,” Keenan, who turns 91 next week was quoted as saying by AFP.

Wearing a face-mask and sporting a snowman T-shirt under a grey cardigan she told reporters: “It’s the best early birthday present I could wish for because it means I can finally look forward to spending time with my family and friends in the New Year after being on my own for most of the year.”

Today the first vaccinations in the UK against COVID-19 begin. Thank you to our NHS, to all of the scientists who worked so hard to develop this vaccine, to all the volunteers – and to everyone who has been following the rules to protect others. We will beat this together. https://t.co/poOYG1vHQe

The first in line to get the vaccine on what has been dubbed “V-Day” are the over-80s, care home workers and at-risk frontline health and social care staff.

They will then require a second jab in 21 days’ time.

Last week Britain became the first country to approve the Pfizer-BioNTech vaccine, raising hopes of a breakthrough in the pandemic, which has killed more than 1.5 million people worldwide.