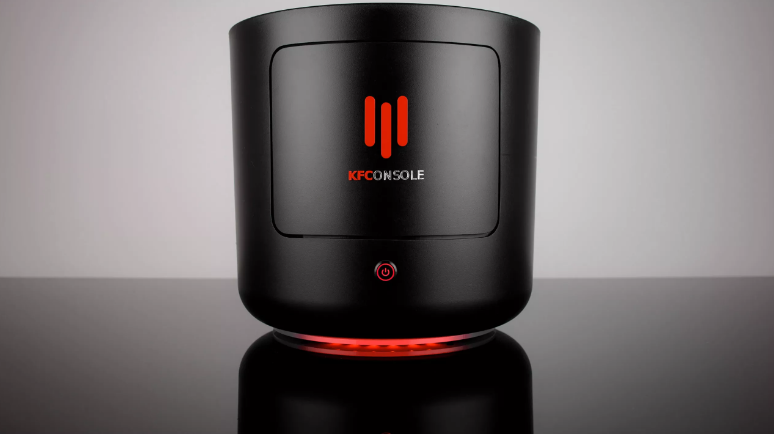 Remember when fast-food giant KFC revealed its ‘console’ back in June that featured a chicken chamber for keeping your food warm while you game? The whole thing appeared to be a very successful marketing stunt piggybacking on the recently revealed PS5 design, but no, the KFConsole is real.

Following the initial announcement of the KFConsole, which boasts 4K/240 FPS and chicken-warming abilities, the company later announced that the November 12 release date was being pushed back—presumed to be a joke aimed at Cyberpunk 2077 and its many delays.

A Cooler Master rep told Tom’s Hardware that the PC is powered by an Intel NUC 9 Extreme Element inside a modified Cooler Master MasterCase NC100. The Element used in testing came with a Core i9-9980HK CPU, though there’s no confirmation that particular CPU will be an option in the final product.

The NUC Compute Unit comes in i5, i7, and i9 options, and there’s an Asus RTX graphics card along with two Seagate BarraCuda 1TB NVME SSDs. Interestingly, Cooler Master writes that the bucket features a “first of its kind hot swappable GPU slot,” allowing it to remain the “most powerful console for generations to come.”

“The cylindrical bucket design and the chicken bay [are] two separate features that by themselves [are] challenging to work with. And then combined with a high-performance PC, well, I had to spend days creating the 3D model for it,” Malmborg told Tom’s.

The chicken chamber does more than keep food hot; it also helps the internal components stay cool. KFC says the system is designed to “extract system heat through around the outside of the chicken chamber, ensuring that the hardware is kept at a regular core temperature while simultaneously delivering a piping-hot meal.”