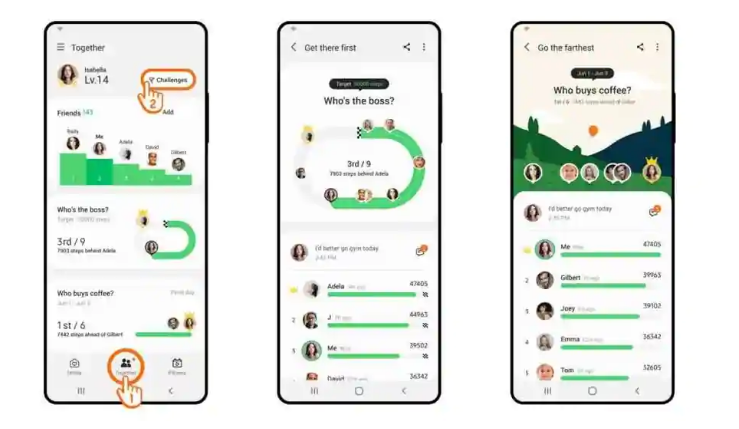 New Year’s Resolutions about personal fitness probably involved everyone (including us!) promising to work out either indoors or outdoors, and Samsung wants to join in on the fun – with a new challenge feature for groups that allows groups of friends to compete with each other.

The South Korean electronics giant announced yesterday that it was upgrading its health app with a Group Challenge feature in the ‘Together’ section of the app, which will track which friend reaches various goals first. Previously, users could participate in one-on-one challenges as well as a massive Global Challenge, by entering monthly step count competitions against all Samsung Health users around the world.

While users can invite up to nine friends to join their group challenge, Samsung has also stated that even once you create your first challenge you can create multiple challenges to “simultaneously compete with family, friends and co-workers”.

Last year, Challenge participants had an Average Daily Step Count of 5,488, while general users were lower at 4,388 steps a day.

According to the company, the app currently has 201 million active users and 20 million participants using the Challenge feature in its current format. It also revealed that they had collectively taken 78 trillion steps and burned 3 billion calories, traveling a whopping 59 billion kilometers. To put that in perspective, that’s 200 round trips from the earth to the sun!

Samsung plans to roll out the Group Challenge feature to all users via an application update on January 12, two days before the 2021 Galaxy Unpacked event. Users can download the app from both the Google Play Store and the Galaxy App Store beginning Tuesday.