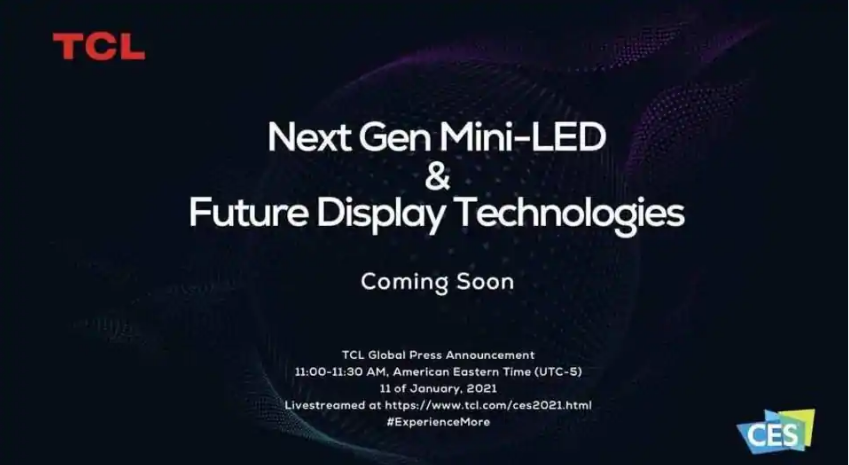 TCL said it would join multiple sessions at the first-ever digital CES conference. Apart from Mini-LED technology for displays, it will showcase a full range of smart home appliances. The new devices are part of the company’s AIxIoT strategy. The company did not disclose more details about its upcoming devices.

“TCL is proud to be at CES 2021 and a member of this vibrant industry. As one of the leading consumer electronics brands in the world, and second largest TV brand in America, it is our mission to make life intelligent with innovative technology through our AIxIoT strategy. Moving forward we are committed to providing the best smart products and services to global users,” said Kevin Wang, CEO of TCL Industrial Holdings and TCL Electronics in a release.

TCL will be joined by the likes of Samsung, LG and Sony to showcase their next-generation smart TVs at the CES 2021. Samsung has also released two trailers for its CES event. According to reports, Samsung will launch 4K and 8K OLED TVs along with micro LED TVs and new home appliances at the event.

LG has confirmed it will showcase a 48-inch bendable 4K display with its CSO technology. The display will be capable of morphing between a curved screen and a flat-screen. The new panel is primarily aimed at gaming enthusiasts.

The company will also showcase transparent OLED at the upcoming technology conference. Sony has also hinted at launching a new line of Bravia TVs at the conference.

We’re likely to find out more about these announcements in coming days. The CES 2021 is slated to kick off on January 11. The announcements, however, are likely to be made a couple of days before the event begins.