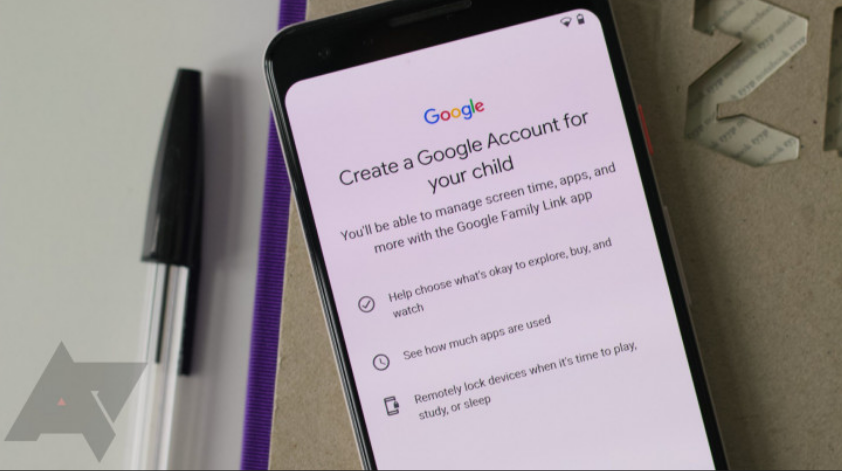 Family Link is Google’s solution for giving children under the age of 13 access to its services. Parents have to set up their kids’ accounts and are responsible for what they do on the web and their phones.

There are also control instruments that allow parents to impose restrictions like bedtime and daily app limit timers, and get an exact breakdown of what children are using their devices for.

Needless to say, kids hate the service, and they’re vocal about it: The Family Link app for kids has a staggering 1.4 rating average on the Play Store.

Setting up a child account is pretty straightforward. You can do it on a brand-new device or create a second profile on an existing phone.

Google leads you through the mandatory parental consent and explains how the Family Link service works: Parents can see stats, enforce age restrictions, set app limits and filters, control which apps can be installed, and so on.

There are essentially two tiers of Family Link controls: Children under 13 have much stricter limits by default and can’t use many Google services, while accounts for kids older than 13 don’t need to be set up via Family Link.

If parents want to, they can still connect older children’s accounts and supervise them via the service, though teenagers can turn that off from their account. (These are the conditions in the US and in many parts of Europe, but the exact ages and options may vary by country.)

Children under 13 are only allowed to use YouTube Kids. The regular YouTube app and YouTube Music are off-limits to them, and there’s nothing a parent can change about that.

It’s also a problem if teachers rely on educational YouTube content, especially with the ongoing pandemic. If content they send isn’t explicitly marked as child-safe, kids won’t be able to access it on their devices.

Now, keep in mind that an app like Firefox may work fine for me, but the third-party browser doesn’t respect the website restrictions you might want to impose on your kid — that’s the case for any third-party app not made by Google, so be sure to screen which apps you allow on your child’s phone.

If you only want your child to visit a specific subset of websites, you’ll have to stick with Chrome and won’t be able to use the browser workaround for YouTube and other hard-blocked websites. If you were thinking, “Why not just use Chrome’s incognito mode,” I’m sad to inform you that it’s not available on children’s accounts. There’s a reason why sites like VideoLink have to exist.

It’s a private domain name lookup service that acts like a customizable firewall for your complete home network or individual devices, and you can use it to block content you don’t want your kid to be able to view.

The problem is that DNS settings can be changed on Android without parental approval, so it’s not a foolproof technique. If you want to make sure that your kid can’t break out of the protected environment, adding a secondary router with NextDNS enabled and its own Wi-Fi network might be your best bet, though that introduces new problems for your kids with things like Chromecast and network printing.

You could also use Cloudflare’s family DNS which automatically blocks adult content if you prefer a less restrictive approach for your whole home network.

Kids being kids, they’re probably going to want to play a game or two on their phone or tablet. But Google won’t make it easy for you to sync progress to the cloud.

The company’s all-encompassing tool for that, Play Games, isn’t available for kids under 13. That means you’ll have to hope that game developers have implemented their own mechanisms for syncing, and if they don’t, you might be out of luck once it’s time to upgrade your kids to a new phone or tablet.

If you’re keen on sharing your Stadia games with your kids, you’ll be happy to hear that you just need to set up your child’s account and activate Family Sharing in the Stadia settings. All of this can be done in the web interface on stadia.com.

If you want to get your kid a service like Pushbullet that only relies on Google and Facebook authentication, be aware that Google child accounts don’t support third-party logins. You’ll have to sign in via Facebook in this case, too. Most services offer their own logins these days, but you might run into the odd one or two that don’t.

If you get your kid a Chromebook, you’ll run into similar, if not worse, restrictions. Like on Android, children aren’t allowed to use incognito mode, and parents can manage which websites kids can visit. Chrome will also block as many sexually explicit and violent sites as possible.

Above: Firefox on a Chromebook ain’t exactly pretty. Below: Something like Vivaldi is the better choice here.

Chromebooks don’t run any browser other than Chrome out of the box, but thanks to Android app support, I could install Firefox and use it to access the forbidden services and other Google accounts. I quickly switched to Vivaldi because of better scaling and a proper tabbed interface, though. Again, parental website restrictions don’t apply to third-party browsers, so use them with caution.