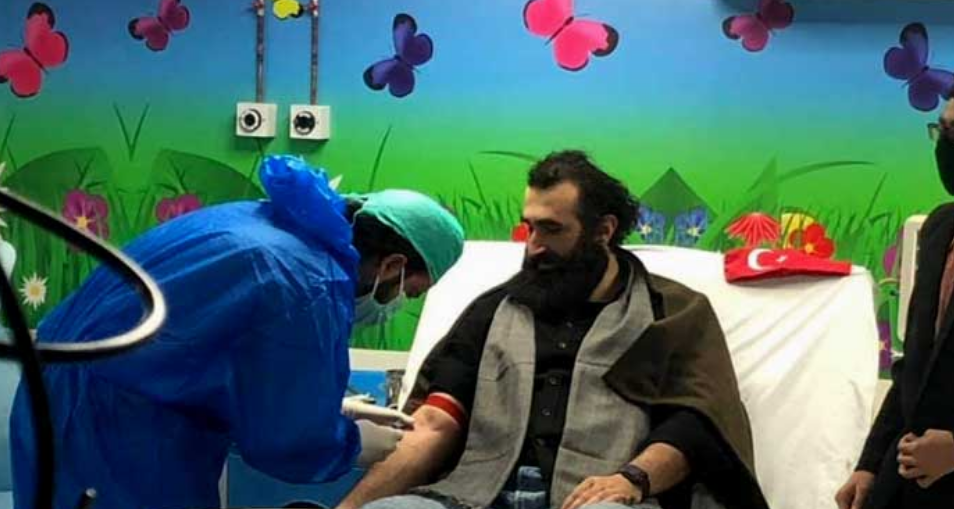 “I’m donating my blood for the Pakistani children suffering from thalassemia. This will not only strengthen the bond between Turkey and Pakistan but will also encourage others to donate blood for those who need blood donations for living normal lives,” he said, during his visit on the invitation of administrations of both the health facilities.

Accompanied by producer of the epic serial Kemal Tekdin, the Turkish actor recited verses from the Holy Quran, raised slogans which he chanted in the drama serial and also shouted “Jeevey Jeevey Pakistan“, “Pakistan-Turkey friendship zindabad” and vowed to come visit Pakistan again.

The production team of Dirilis: Ertugrul was invited to visit the Omair-Sana Foundation and Children Hospital Karachi by the its founders Dr Kashif Ansari, a US-based oncologist, and Dr Saqib Ansari, an eminent pediatric hematologist who are striving to eliminate thalassemia and other blood disorders from Pakistan.

Emir Jamat-e-Islami Karachi Hafiz Naeem-ur-Rehman and dozens of fans of Ertugrul’s cast and actors were also present on the occasion.

Eminent BMT Surgeon and General Secretary OSF Dr Saqib Ansari said he was delighted that Celal Al and other team members of the Erturgrl serial visited the hospitals and donated blood.

“Turkish blood is being donated for Pakistani children; this will further strengthen the bond between the two nations,” he said.

Speaking further on the occasion, Celal Al said he was delighted to visit Pakistan, especially the two wonderful health facilities where children suffering from genetic blood disorders were being treated and managed free of charge and offered his complete support in the treatment of children with thalassemia and other blood disorders.

Celal Al, who spoke with the help of an interpreter, said Turks and Pakistanis are brothers but he was not expecting such love and affection for Turkey and its people in Pakistan.

He wished to continue visiting Pakistan whenever possible, saying mutual cooperation between the two countries and people should grow with each passing day.

To a query, he said he loved Pakistani food, especially biryani and lamb which he ate in Islamabad and wished to taste biryani in Karachi also.

Kemal Tekdin, the producer of Ertugrul and other famous Turkish plays, said work was underway on two joint projects in Pakistan which were based on the lives of “Abdur Rehman Peshawari” and “Babu Shah”. He said that these plays would be produced both in Urdu and Turkish languages and would also be dubbed in English.

US-based Pakistani oncologist Dr Kashif Ansari who invited the Turkish team to Pakistan said he wished to enhance cooperation in the field of media and entertainment industry between Turkey and Pakistan.

Ansari said that in the coming days, “instead of idealising Indian actors and film stars, Pakistani children will idealise Pakistani and Turkish stars and heroes in the history of Muslims”.

“We are working to produce a serial on the poetry and message of Allama Iqbal and Abdur Rehman Peshawari. Abdur Rehman Peshawari was a Muslim from the subcontinent who went to Turkey, fought along with Turkish brethren and also served as Turkey’s ambassador in Afghanistan. He got martyred there and now regarded as a hero in Turkey,” said the oncologist.