Skip to content
You are here
Home > Did You Know! > Trump is the First Ever President to be Impeached Twice 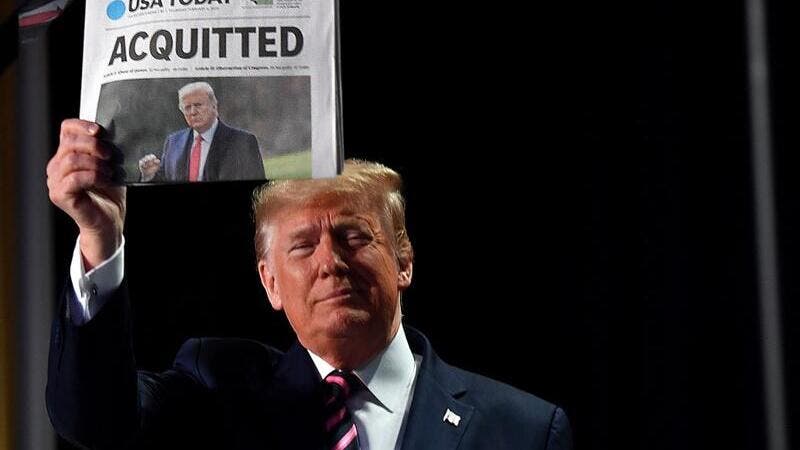 The US House of Representatives voted Wednesday to impeach President Donald Trump on a single article of incitement of insurrection, making him the first president in US history to be impeached twice.

The 232-197 vote now sends the matter to the Senate for a trial that is expected to begin after Biden is sworn in Jan. 20. In all, 10 Republicans broke with their president in supporting his removal from office.

That is a far cry from Trump’s first impeachment when House Republicans uniformly rejected his ouster. That effort resulted in Trump’s Senate acquittal in February 2020.

This time, the House weighed a sole article of impeachment that accuses Trump of attempting to foment insurrection for his role in last week’s deadly siege of the Capitol.

Addressing a rally of his supporters assembled less than 2 miles from the federal legislature on Jan. 6, Trump repeated his claims that the Nov. 3 presidential election was stolen, telling the crowd they must “fight like hell” as lawmakers prepared to certify Electoral College votes that would eventually cement President-elect Joe Biden’s victory.

“Our country has had enough, and we will not take it anymore,” he told the gathering, many of whom later flooded the Capitol as lawmakers were certifying Electoral College results. “We will stop the steal.”

Trump and his political allies have continued to tout the allegations despite successive legal defeats, including before the Supreme Court, in which they were dismissed. Federal investigations urged by Trump also found no evidence to support them.

In all, five people died when a mob of his supporters besieged the US Capitol building, overrunning police as they barged into Congress through broken doors and windows. Among the dead was Capitol Police officer Brian Sicknick.

Trump is just the third president in US history to be impeached, and should the Senate vote to convict him of the incitement to insurrection charge that would mark the first time the chamber successfully tried an impeachment article. The only other presidents to be impeached have been Bill Clinton, and Andrew Johnson.

Outgoing Majority Leader Mitch McConnell said shortly after the House’s vote concluded that he would not be invoking an emergency session to expedite Trump’s trial, and that the matter would not be taken up until after Biden is sworn-in to office next Wednesday.