When Where How Pakistan WhenWhereHow.PK | Technology And Business News from Pakistan
Home Business Federal Budget 2022-23 with Total Outlay of Rs 9.5 Trillion Presented in NA 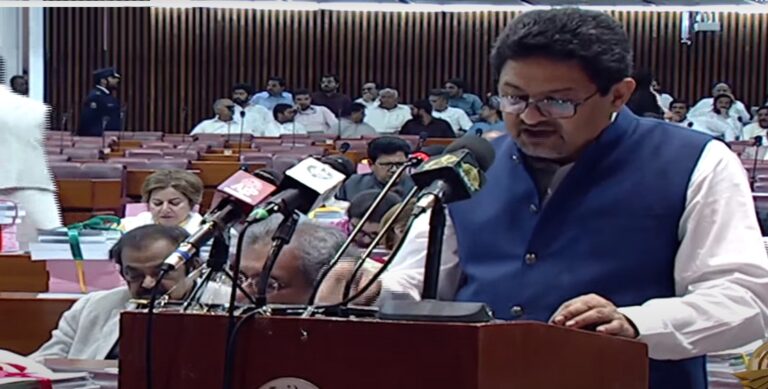 The Federal Budget for 2022–23 has been issued, with total spending of 9502 billion rupees, containing measures for long-term economic growth, industrial and agricultural development, and poor-people aid.

When he presented the budgetary recommendations for the upcoming fiscal year in the National Assembly on Friday, Finance Minister Miftah Ismail said 3950 billion rupees will be spent on debt servicing. He stated that a budget of 800 billion rupees has been set for the PSDP for the next year.

Grants of 1242 billion rupees have been proposed, including grants from the Benazir Income Support Programme, Bait-ul-Mal, and other departments.

According to Miftah Ismail, Prime Minister Shehbaz Sharif wishes to provide the utmost help to the people, particularly the impoverished, during these challenging circumstances.

The government has taken many initiatives to give subsidies and help in this regard. He did say, though, that continuing this would need greater resources.

To accomplish this, a specific tax on higher-income earners must be imposed to redirect resources to the poor.

Miftah Ismail stated that our budget concept is to increase agriculture production, particularly edible oil production, to minimize agricultural imports. We need to encourage industries to boost exports and gain precious foreign cash. This, he claims, will help address the issue of the perpetual balance of payments.

According to the Finance Minister, the current government’s primary focus is austerity. This budget includes a reduction in government spending, and we are making meaningful moves in that direction. He stated that automobile purchases would be completely prohibited.

Apart from development initiatives, the purchase of furniture and other products would be prohibited. Cabinet members and government officials will have their gasoline quotas lowered by 40%. There will also be a ban on foreign tours paid for by the government, with the exception of the most important ones.

According to the Prime Minister’s vision, a medium-term macroeconomic framework has been established to set the economy on a path of development, according to the Finance Minister. He emphasized his belief that by implementing this framework, we would be able to steer the economy in the correct way. Our biggest problem, he remarked, is how to expand without a current account deficit. As a result, a minimum of 5% will be obtained without disrupting the equilibrium.

He stated that we are attempting to lower inflation through improved fiscal and monetary policy. During the next fiscal year, inflation will be decreased by 11.5 percent.

He predicted that the tax-to-GDP ratio would rise to 9.2 percent in the next fiscal year, up from 8.6 percent now. He noted that in 2017-18, we had kept this ratio at 11.1 percent. He stated that the entire deficit, which is now at 8.6%, will be steadily reduced. In the coming fiscal year, this will be reduced to 4.9 percent. The total main balance, which is now -2.4, is similar.